Bolt plays down rivalry with Blake 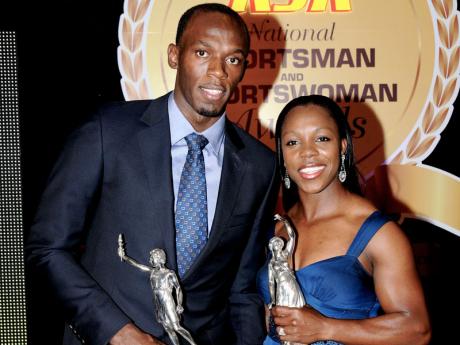 Usain Bolt and Veronica Campbell-Brown pose with their trophies after they were named RJR Sports Foundation's National Sportsman and Sportswoman of the Year at the awards ceremony held at The Jamaica Pegasus hotel, New Kingston, last Friday night.- Winston Sill/Freelance Photographer

Bolt, while collecting the spoils of another successful season, which saw him win the 200m at the IAAF World Championships, register the fastest time over 100m with a 9.76 clocking, while finishing the season unbeaten, made it clear that the friendship between himself and Blake has not been affected by the latter's recent breakthrough.

"There was a lot of things stirring up in the media, so I thought I would take the opportunity to clear it up," said Bolt, in front of a packed ballroom and live television audience. "It's good to have rivalries, but when you try to break up a friendship, that is the wrong way to go."

"The rivalry is always going to be there, because we are two great athletes, but in training, it's all about hard work and outside of that, we are good friends. We will ... enjoy our friendship and we will both continue to work hard. If I win, Jamaica wins, and if Yohan wins, Jamaica wins, so it's good for the country anyway," Bolt added.

Is was a big night for the big Jamaican, who was also presented with the Sagicor Iconic Award, but was he surprised with his Sportsman of the Year nod?

"I am surprised," Bolt admitted. "I think it was always a 50-50 chance because Yohan had a great year, so I was slightly surprised, but I am happy and I will continue working hard."

Blake was named the runner-up Sportsman of the Year.

There were not many surprises when world 200m champion and 100m silver medallist Veronica Campbell-Brown was announced by co-hosts Neville Bell and Simon Crosskill as the 2011 National Sportswoman of the Year.

It was the fifth time that Campbell-Brown, who also won last year, was receiving the nation's top sporting honour.

"I am honoured," said Campbell-Brown. "There are so many great female athletes here who all competed very well in 2011 and I am privileged that I was given this award."

Among the surprises of the night, however, was Asafa Powell's victory in the People's Choice Award for his 10.08 seconds win in the 100m at the Jamaica Athletics Administrative Association (JAAA)/Supreme Ventures Limited National Senior Championships last June. Powell's run received more public votes that Yohan Blake's 19.26 seconds 200m run in Brussels, which was the overwhelming favourite to get the popular approval from the members of the public.

In easily the most emotional moment of the awards, RJR Sports Foundation chairman Gary Allen gave the Chairman's Award posthumously to former JAAA president Howard Aris who died last year. Aris had served the sporting landscape for over 30 years and presided over Jamaica's most successful track-and-field era. Son, Quentin, accepted the award.

"The London 2012 Olympic Games are around the corner and once again Jamaicans are the chosen topic. There is a vast Jamaican community there ready to welcome you," said Sanderson.

"The whole world and not just those who will be in London, will be looking to Jamaica. Everyone wants to see the Jamaican athletes and what they will do there, mainly because from Beijing, they left such a flurry of records and medals, and London has a massive black community, which is excited about seeing their favourites."

There were team awards to the national senior, U-15 and U-19, sight impaired and women's cricket teams for regional championship wins, the Parapan team, Special Olympics team, World Youth Championships girls medley relay team and the World Championships 4x100m men and women as well as the 4x400m women's team.