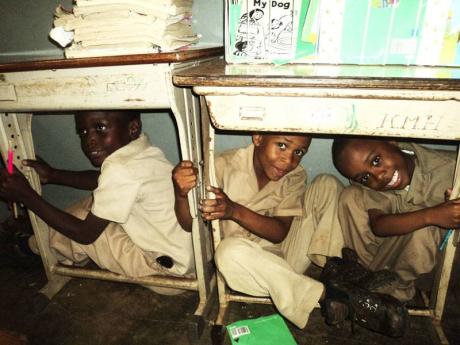 Students at Pratville Primary & Infant School in Manchester take cover during a recent earthquake presentation and drill at the school. - Contributed photo

Jamaica is due to experience an earthquake on the same scale as one that sank a section of Port Royal more than 300 years ago, according to the Earthquake Unit at the University of the West Indies.

"The past is a key to the future, so what has happened before will happen again," Dr Lyndon Brown, research fellow and head of the Earthquake Unit, told The Gleaner yesterday.

Brown said that although he was certain the island would be hit by another major earthquake, he could not give an accurate time frame for his prediction.

"There have been some calculations about 144 years after the 1904, some about 84 (years), but it's really not accurate," he told The Gleaner.

"We believe these are cycles but we don't know the recurrent intervals. Some calculations have been done based on the history of earthquakes, we don't know what has happened before, we have not done enough research to understand the history of earthquakes prior to this. So any calculations that have been done or any recurrent interval that is calculated is just based on a short history, so it's really not accurate."

Meanwhile, Senior Deputy Superintendent in charge of operations of the Kingston and St Andrew Fire Department, Maxwell Hinds, says his division is not prepared to manage anything of the magnitude that hit the island in 1692, claiming the lives of more than 3,000 people.

"The Kingston and St Andrew division of the Jamaica Fire Brigade is, I would say, equipped to respond to fires and some search and rescues, but in a major disaster, we would have problems," Hinds said.

Speaking with The Gleaner at the National Simulation and Training Exercise Programme (NSTEP), Hinds said: "If it becomes a mass situation, we might have to seek multi-agency assistance but if it's just confined to a section, we might be able to manage and we would get resources from neighbouring parishes, so it all depends on the extent of the situation."

NSTEP was established by the Office of Disaster Preparedness and Emergency Management and yesterday held its National Simulation Exercise, on the challenges that would affect the education sector in the aftermath of a major earthquake, at the Jamaica Conference Centre in downtown Kingston.