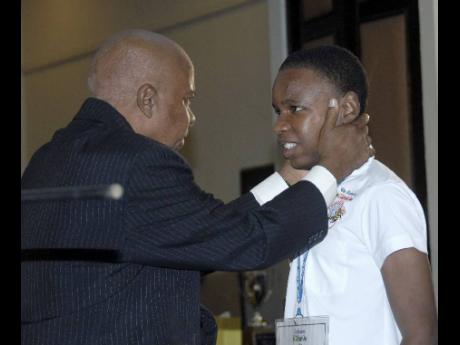 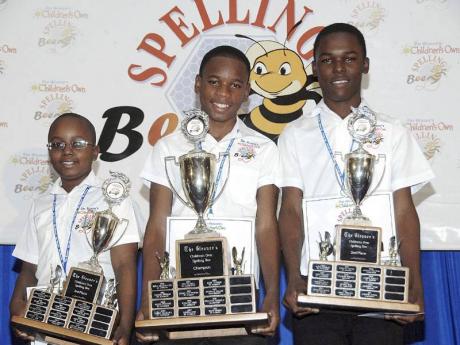 Five months ago, Gifton Wright made a declaration which he reaffirmed many times after.

"I will win ... . I'm gonna win," the 13-year-old Kingston College student said shortly after winning the Kingston parish final of the 2011 Gleaner's Children's Own Spelling Bee.

Yesterday in the ballroom at The Jamaica Pegasus hotel in St Andrew when the competition came to a head, he did just that - win.

His celebration was somewhat muted, as he seemed exhausted, his eyes a shade of red. Indeed, it seemed the months - and years - of spelling had taken a toll on all the spellers.

But as Gifton put it: "You have to make sacrifices to get big things."

He had earlier sat stone-faced, refusing to offer even a slight smile for the audience of children and adults who came out in support of their favourite spellers, many travelling from as far as Westmoreland.

A picture of concentration interfused with nerves, he fit right in with the 13 others who sat staring blankly ahead, their body language portraying in some way or the other the gravity of the event that was about to unfold.

Gifton, who entered the final round with two handicaps, which he held on to till the very end, made L-L-A-N-O the championship word when he pulled ahead of his teammate, Davian, who had by then exhausted his two handicaps.

Both top spellers were coached by the Reverend Glen Archer, who has conditioned an impressive 23 national winners. Archer said, of the three spellers in his charge in this year's finals - Tianne Barclay being the third - he most expected a win from Gifton.

"Gifton was the most experienced," he said of the second-form student who secured fourth place in last year's national finals. This time, he led a brigade of boys who wrestled for the top four spots. Jaden Henry and Jonathan Liu rounded out the four. Champion girl Tianne Barclay placed fifth.

The experience to which Archer referred was in relation to duration in his spelling programme; since Davian, at 14 years, is the veteran in the national competition, having faced the spellmaster a total of four times.

At the other end of the age spectrum was Jaden, the 10-year-old who put in a valiant fight for third place. With only one handicap, he spelled without letting up for most of the afternoon till F-L-A-B-E-L-L-A-T-E proved his undoing. Davian would follow immediately thereafter with D-E-W-L-A-P.

The Jonathan Grant High student could not hold back the tears which had threatened to flow from he first misspelt a word. He sat in dejection - eyes lowered, head bowed. The four-time parish champion just could not take it home on this his final opportunity at national glory.

"I think I was having an emotional breakdown," he later revealed.

"If he's gonna lose, I will carry the baton for the (Archer) programme," was Gifton's reaction to his best friend's unfortunate circumstance.

Jaden, on the other hand, declared that he was "very elated" at his third-place showing and vowed to return next year to claim the title.

Fourteen parish champions contested the spelldown, but there could be only one who would position himself to head to the Scripps National Spelling Bee in Washington, DC, later this year.

After gruelling rounds of spelling, they were reduced to the top seven finalists - Jonathan Liu from Westmoreland, Lois Robinson from St Elizabeth, Tianne from St Andrew, Jaden from Clarendon, Davian from St Catherine, Rushawn Stewart from Portland, and Gifton from Kingston.