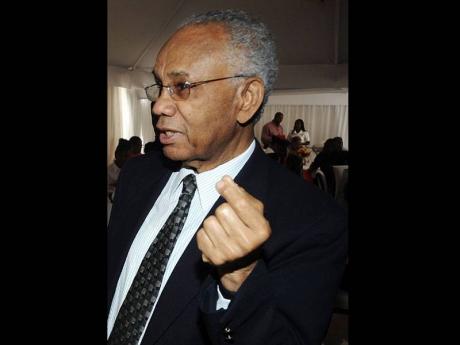 Senior technocrats, including Dr Carlton Davis and Winston Hay, yesterday acknowledged they have warmed to the new Government's endorsement of coal as a means of slashing energy costs and propelling production.

In his words, the reserves of main supplier Trinidad and Tobago (T&T) cannot be pinned down.

"I must confess I have become more agnostic on the issue," Davis, also a former Cabinet secretary, told a group of academics, Gleaner editors and reporters during discussions at the newspaper's North Street, central Kingston, offices.

"If they have gas, then Jamaica would be a safe long-term market but you cannot pin them down for what they have. So I have become more agnostic on the issue and agree with (Phillip) Paulwell (to use coal as an option)."

Paulwell, the minister of science, technology, energy and mining, last week said the new People's National Party (PNP) administration was open to Jamaica's power plants burning coal and petcoke, cheap fuels that often find themselves in the cross hairs of environmentalists because of their high carbon emissions. Paulwell claimed its introduction would slash energy prices by half in three years based on implementation. He would expect the price of electricity over the period to fall to between US$0.15 and US$0.18 per megawatt hour, from US$0.40, or a fall of between 55 per cent and 62 per cent.

"T&T goes through these mercurial changes: One day they have reserves and another day they are running out of reserves. So you never know where you are. It's one of the most frustrating situations," said Davis about T&T, which traditionally holds among the highest gas reserves in the hemisphere, from which Jamaica planned to purchase.

Yesterday, a representative at the T&T High Commission initially raised doubts about Davis' concerns then offered to relay Gleaner queries to the T&T energy ministry.

Jamaica imports more from T&T than any other nation in the world except the United States (US), according to Statistical Institute of Jamaica data, due to its oil and manufacturing base. Specifically, US imports to Jamaica totalled US$1.4 billion while T&T imports totalled US$672 million between January and August 2011.

Hay, former Jamaica Public Service Company (JPS) managing director and former head of the Office of Utilities Regulation, raised doubts as to whether LNG could slash costs substantially by half. However, he reasoned that coal remained the most economic option for the island.

"The Government talks about the use of LNG as a fuel source for Jamaica and that has been promised to Jamaica since the '90s. There is no positive indication that we are further to having LNG as an economic fuel than we were then. Until you can do something about fuel, I do not see any action that can be taken that would produce that kind of reduction to the cost to the consumer that Minister Paulwell (claims)," stated Hay during the forum. "Even with a new fuel source, I think that percentage reduction would be difficult if not impossible; even with LNG. But with coal, I believe it is a more economic fuel for Jamaica."

A coal plant costs roughly three times the cost to build an equivalent LNG plant; but the price of coal is far cheaper than LNG. Oil, which currently hovers at US$100 a barrel, fuels the bulk of the island's mostly ageing power-generation plants. LNG and coal offer a cheaper fuel source for integration into new power plants but these options have remained mostly stalled since the '90s, in part due to political indecision.

Last year, the Jamaica Public Service Company (JPS) announced the planned construction of a $52-billion (US$602 million) LNG power plant which would add 360 megawatts of generating capacity to the national grid and replace older generating units. The plant would operate on diesel as backup fuel.