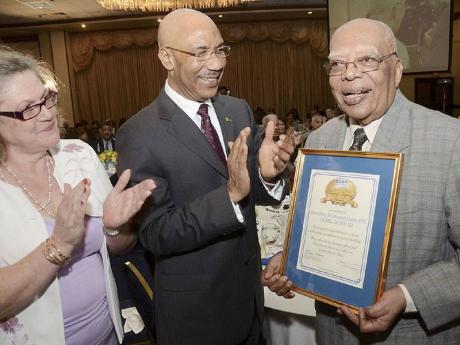 THE CARIBBEAN Community of Retired Persons Limited (CCRP) on Wednesday honoured 62 Jamaicans who created a legacy for the nation.

Fifty persons were to be awarded to commemorate Jamaica's golden anniversary, however, the organisers felt that was insufficient compared to the number of 'living legends' who have contributed to the society.

The CCRP Living Legacy awardees included 'legends' from every walk of life whose work has had a positive impact on Jamaica's development. In fact, the CCRP founder Jean Lowrie-Chin described their contributions as "treasures to be recognised and cherished as an inheritance for generations".

"The Jamaica 50 Living Legacy Awards is truly an endorsement of our mission at the Caribbean Community of Retired Persons - to work towards ensuring that the vast talent, experience and wisdom of our seniors will be respected and that they enjoy the quality of life they so richly deserve," said Lowrie-Chin.

"No country can afford to lose the wealth of knowledge vested in our senior citizens, and our young people should never be deprived of the interaction and mentoring of our senior citizens. We should also recognise those who have played an active role in Jamaica's development," Sir Patrick said.

The CCRP was launched in April 2010. Its objective is to be a vital resource for both retired persons and those preparing for retirement. It provides financial planning advice, information on health and wellness, opportunities for volunteering and for mentoring young persons, free educational seminars and many other benefits. The CCRP now boasts more than 600 members across Jamaica.