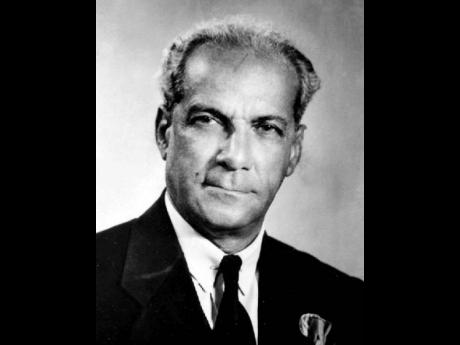 G.C. Foster returned to Jamaica in triumph after establishing himself as a world-class sprinter in the post-1908 Olympic athletic meets in Britain. He continued his athletic career, and over the next seven years successfully defended his 100-yard title in the Jamaica Open Championships.

In 1915, he retired without ever realising his dream of competing in the Olympics, nor was he able to accept Harry Andrews' invitation to run competitively in Britain again.

The Jamaica to which Foster returned was hardly focusing on the development of adult athletic competitions with an eye to participating in the Olympic Games.

Despite his spectacular achieve-ments, the annual open athletic championships in which he continued to participate became increasingly marginalised as organised athletics in Jamaica became more focused on the competitions between the emerging elite boys' high schools.

Role of the Elite High Schools

York Castle High School, established by the Methodists in 1876 was the first of the elite high schools to make organised sports an integral part of the its curriculum. Writing in 1915 when the Inter-Schools Athletic Championships was becoming the stellar athletic attraction, an old boy of York Castle, in a letter to The Daily Gleaner, expressed the view that "Athletics at York Castle was every bit as honourably held as they are in the best secondary schools in the island today".

The new format for the Inter-Schools' Athletic Championships or 'Boys' Champs', as the meet came to be known, divided the competitors into three classes - Over-16, Under-16 and Under-13 - for the running events. For the jumps, the criteria of height that had been used in the Handicap Championships to separate Class I from Class II was maintained. There were also five open events: the 880 yards, 120 yards hurdles, pole vault, throwing the cricket ball, and the standing high jump.

The facilities at Boys' Champs were hardly up to international standards.

"The track measured 352 yards and lanes were only used for the 100 yards. ... There was no take-off board for the long jump ... neither a foam landing for the high jump. You land on solid 'dutty' - a straw mattress was provided for the pole vaulters" (MacDonald).

Nurturing an Elite for Leadership

Boys' Champs was conceived as an integral part of the cultural orientation of the elite. Jamaica College, Wolmer's, and Potsdam, the three schools which dominated the meet from its inception, had an enrolment of 351 boys among them. Like the mid-Victorian English public schools of the day, their primary role was to prepare an elite for the exercise of effective leadership in a British colony.

The headmasters of these schools were, as educators, all steeped in the British classical tradition and Anglo-Christian values. They embraced the Olympic ideal, which elevated taking part to the same level as winning.

In the 1916 Champs, after JC dethroned Wolmer's, the editor of The Wolmerian consoled his fellow students with a verse from Longfellow:

"No endeavour is in vain, its reward is in the doing.

And the rapture of pursuing is the prize the vanquished gain."

In the training of an elite, organised sport was a critical component of the wider educational process. The primary objective was to develop a "healthy mind in a healthy body" and the lesson derived from contemporary Christian teaching was to emulate the "manliness of Christ".

Judging from the results, it is clear that from its inception, Boys' Champs was a world-class athletic meet. At the first championships in 1910, J.M. 'Fire' Hall of JC won the Class I 100 yards in a time of 10.2 seconds, which converts to 11.1 for the 100 metres. He clearly could have held his own in the Olympic finals of 1912 at which the 100m finals was won by Ralph Craig in 10.8 seconds, with the next four runners all timed at 10.9 seconds.

Norman Manley's times of 23 seconds for the 200 yards in 1911 and 14.6 seconds for the high hurdles would have been good enough to earn him a place in the Olympic finals of 1912.

Guy Graham's remarkable victory in the pole vault in 1917 confirms the quality of Boys' Champs. That year, when he cleared the bar at 10', he had eliminated all other competitors. He then asked that the bar be raised to 10' 3'' (3.124m), which he cleared "with apparently even less effort, winning the unstinted applause of all the boys".

For the record, the eighth-place finalist at the 1920 Olympics cleared 3.5m.

The ability of Jamaican schoolboys to compete at international standards was not limited to the sprints, the hurdles, and the pole vault. E.C. Marsh (JC) and H.W. Myers (Wolmer's) performed at the same level in the high jump, an event which they both won for three consecutive years.

The fact that these performances came from less than one per cent of the high school age group indicates in no uncertain terms the enormous athletic potential of Jamaica.

The foundation of these impressive performances was not a gift from the gods. It was the product of his extensive physical conditioning, mostly unconscious in the early years.

Norman Manley, who in the first three years of 'Champs' competed in 17 events, winning 12 and placing second in five, credited his phenomenal achievement to his early outdoor upbringing.

"I grew up as a bush man. ... I would go out in the morning with the workers ... and get home late at night after 12 to 14 hours on the constant move. The result was that I was tough as hell and developed a stamina that I have never seen surpassed."

Another outstanding performer was another JC boy, M.O. Marsh, who defeated Manley in both the 440 and 880 yards and started a family dynasty in schoolboy athletics, which has not been overshadowed to this day. He and his brothers had similar backgrounds to Manley's, growing up on a farm in St Mary.

Yearning for an International Stage

Despite the world-class per-formances at Boys' Champs in the first 20 years, the careers of schoolboy athletes were shortlived.

Jamaica was neither affiliated to the International Olympic Association nor a participant in regional athletic competitions. Without the opportunity to compete on the international stage, there was no impetus to continue training after school.

Outstanding adult athletes, for the most part, had their biggest audience when they competed in a feature race at Boys' Champs. All this would change in 1930 when Jamaican athletes began competing internationally and the road to participation in the Olympics would be finally opened.