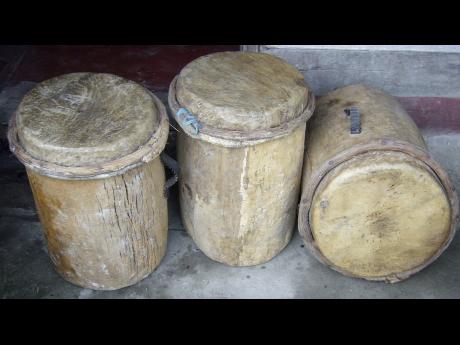 Three of the drums made by master Kumina drummer and drum maker Gerald Walker of Seaforth, St Thomas. 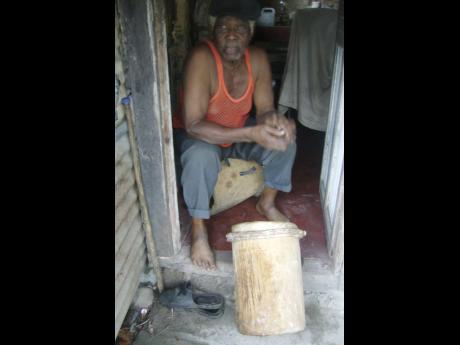 Master drummer and drum maker Gerald Walker, of Seaforth, St Thomas, sitting on one of his drums as he speaks with The Gleaner. 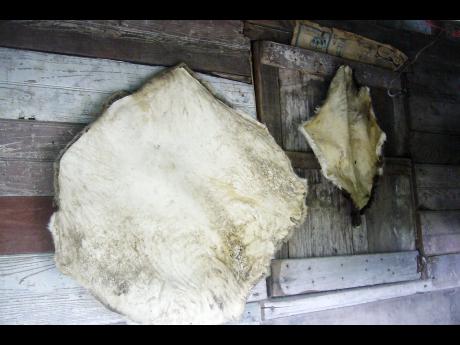 SEAFORTH, St Thomas: Say National Dance Theatre Company of Jamaica (NDTC), and two names that never fail to come alive are Professor Rex Nettleford and 'Kumina'. This most mesmerising art form could not miss the creative genius and vision of the founder of the NDTC, the late Professor Nettleford, former creative director, choreographer and dancer who reprised the role of the "Kumina King" in the NDTC's all-time favourite and show-ender simply named 'Kumina'.

But unbeknownst to many people, near and far, the real Kumina King is 76-year-old Gerald Walker of Seaforth, St Thomas. Trained as a blacksmith by one Eric Fuller from he was about 11 years old, Walker is perhaps the last living blacksmith from his era, and he has many stories to tell about this potentially dangerous craft. Blacksmithing was his day job, but surrounded by Kumina people, as a youngster, he could not escape being a drummer and drum maker. He would perform in Kingston and other parts of Jamaica occasionally.

But things changed for him when Nettleford saw Walker play in the 1969 National Pantomime, Moonshine Anancy, written by Barbara Gloudon. Nettleford invited Walker to play in the NDTC's production of Kumina, and for 25 years, he drummed for the company, travelling abroad many times, slapping and beating the drum, the medium for the language of Kumina, whose alphabet Walker learned in his district of York, St Thomas.

It is the hypnotic sounds of the Kumina drum, made of tree trunks and goatskin, that epitomise its essence. They are not easy to imitate, and very hard to duplicate. And the drum, Walker said, must not be messed around with. It is not to be beaten by just anybody, by people who do not understand its language. Strange things, he said, can occur if they did.

He recalled getting a telegram from Kingston requesting him to play in Montego Bay. He got the message late and was not able to go. He subsequently heard that the drum suddenly burst when the man who replaced him started to beat it. "Sometimes, a no any and every hand fi angle these kind a drum. Is a funny kind a drum, enuh," Walker declared, "it's a spiritual thing." The Kumina drum, he said, is special and should not be beaten without a purpose.

And while the drum is the medium through which communication is made with the ancestors, the sprinkling of rum on to it to appease them, to get their permission is also important in the ritual. This has led many people to label the process ancestor worshipping or obeah working, which is considered an evil practice in many quarters in Jamaica.

Walker recalled an occasion onstage in England when Barbara Kaufman, the then NDTC wardrobe mistress, who was in charge of the rum, was nowhere to be found when Kumina started. So the drums were not rubbed with the white rum. When Walker "roll and clap" the drum, no sound came from it. "It no talk at all," he said, "Mi affi tek time and twis it and tek mi foot and hold wheh it burst till mi slam out the show."

"Immediately from the drum lose sound, Rex know," Walker told The Gleaner. Nettleford panicked because there were three more shows. Walker had to find ways and means of repairing his drum. Since that incident, he would make sure that he kept the rum, which is sometimes used to get people out of the myal back into this realm.

Walker's involvement in Kumina was not confined to beating the drums. He still makes drums for sale, and he said as a youngster, he was an avid dancer, and dancing the Kumina was a joy. "Because yuh got manners and ting, yuh get fi w... up pon some big woman belly skin," he said laughingly, as the mischief jumped out of his eyes and danced on the Kumina King's face.