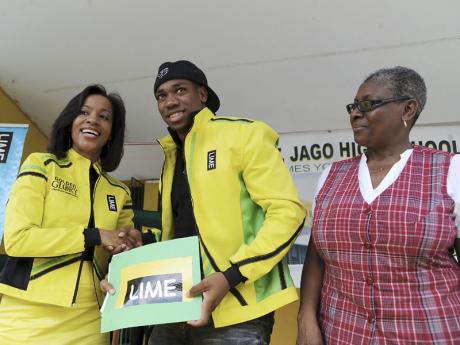 Last season was a breakout one for Yohan Blake, who established himself as one of the top sprinters in the world, after he claimed the 100m World Championships title and followed that up with the second-fastest 200m in history, 19.26 seconds.

With this came the endorsement deals and the 2012 season has started in like fashion for 'The Beast', who yesterday signed what is being described as a lucrative endorsement deal with telecommunications company LIME.

The announcement was made yesterday at Blake's alma mater, St Jago High, with LIME also donating $1,000,000 towards the construction of the school's gym and a further $300,000 to Blake's foundation, YB Afraid.

Blake, who shares Racers Track Club stables with the world record holder for both the 100 and 200m, Usain Bolt, under the guidance of Glen Mills, is happy to have forged a partnership with LIME.

"It is a wonderful feeling, because LIME has been in Jamaica for a long time and they also give coverage all over the world, so to join in partnership with them is great," Blake expressed. "I have wanted this my whole life and I have been working hard for this, and for it to come true, I am really proud of myself," he added.

Following his 9.92 run to win the world title in Daegu, Blake went on to run his personal best time of 9.82 over 100m; first in Zurich and then three days later in Berlin. He was not done yet, and in September of last year posted the second-fastest time in history over 200m, 19.26. Blake seems on course for great things again this year, after clocking a personal best of 46.49 over 400m in his season opener at the Camperdown Classics.

"I ran my first meet at the Camperdown Classics and PR (ed) in the 400m, so that shows a good sign going into the Olympics," Blake shared, while pointing out that he does not feel any pressure going into his first Olympics.

"Coach Mills has prepared me for all of this ... I don't think I will be under pressure, because I train with one of the best in the world; I train with Usain Bolt."

Blake will now be expected to attend LIME events and feature in promotional activities, while LIME will keep him connected whether he is in Jamaica or abroad.

"It is with great pleasure that we welcome Mr Yohan 'Beast' Blake, speed sensation and future Olympian, to Team LIME," LIME's regional vice-president, marketing and corporate communications, Grace Silvera, expressed. "We look forward to a fantastic relationship with him and promise to throw our full support behind him, as he continues to make his mark in the international athletics arena," she added.

Blake left St Jago in 2008, a year after current principal, Sandra Watson, started acting in the position. Watson, who was filled with motherly pride based on Blake's achievements, pointed out that the track star had not forgotten where he is from.

"He is a very generous person, he's loyal and, most important, he has not forgotten where he has come from and we are very happy for him and what he has achieved," she added.