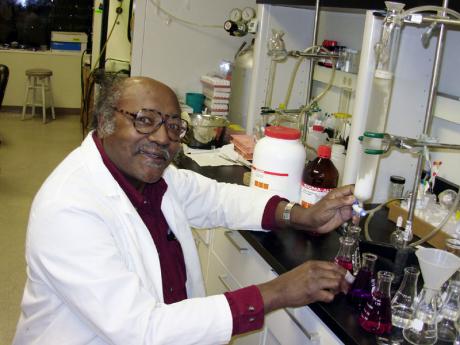 In this 2007 photograph, Nobel Prize-nominated Jamaican scientist Dr Bert Fraser-Reid is seen in the laboratory. Trevor Campbell says Jamaica must seriously focus on research and development in order to woo foreign investors.

With the advent of the technological revolution in the sphere of communications, skilled workers in whatever part of the world are now accessible to capital.

This means that the competition between and among the buyers and sellers of the commodity labour power is now globalised. This is the appropriate context in which to situate any meaningful discussion as to whether Jamaica's capitalist class (the buyers of labour power) and the Jamaican working class (the sellers of labour power) are heading in the direction of becoming competitive components within the global capitalist economy, by the year 2030. This is also the basis for envisioning what the class structure may look like by that 'magical' date.

Around five years ago, I received an email from the executive secretary of the then CEO of GraceKennedy, Douglas Orane, requesting a copy of a paper, Globalisation and the Crisis of the Caribbean Intelligentsia, which Reginald Nugent and I co-authored in November 2003, which he wanted to use for a discussion on globalisation in his senior-management meeting.

Thus we were not surprised by the recent announcement that "the conglomerate intends to earn half of its profit from outside Jamaica as it moves to become a global consumer group within the next eight years." And that "the plan is for the Jamaican company to have its renowned Grace brand sold on three continents as it forms strategic alliances with international partners." (Jamaica Observer, February 07, 2012).

Here is an excerpt from a section of the paper, titled 'Options Facing the Social Classes', that addressed the challenges facing companies such as GraceKennedy, in the context of capitalist globalisation, and to which they would no doubt claim they are trying to craft an appropriate response:

"It is clear that no class can remain viable unless it develops relationships with a wider global network. Existing corporate entities and new entrepreneurial ventures must develop close ties with their global counterparts in order to compete on a global platform. This implies effective partnering and strategic alliances, and in some cases outright merger, in order to tap into resources not available to them operating as isolated entities. This mode of doing business is necessitated by the high level of integration of world production and exchange that has been brought about by globalisation.

"In concrete terms, if a domestically based business (whether locally owned or originating outside the region) is organised to produce articles of personal consumption (clothing, household appliances, consumer electronics, etc.) it must be connected to the global distribution chain as represented by retailers such as Wal-Mart and Target. This further implies that production must conform to the standards that are imposed by the global consumer system. This last point serves to reinforce the argument we made earlier that there is no 'Chinese Wall' between the local and the global market. Globalisation is the generalisation of capitalist production, exchange and culture, and its attendant social contradictions."

What is becoming abundantly clear is this: No Jamaica-based firm will gain entry, or be able to sustain participation in the system of globalised production (which is now organised along the lines of global supply chains), unless it conforms to the generalised standards that are being set by the globally integrated enterprises (GIEs) - the main organisers of these supply chains. The advanced capitalist states - in response to the organised pressure of consumer safety and environmental protection groups - are imposing more stringent safety measures on consumer-oriented goods entering their jurisdictions. In the case of the United States, these measures were initiated in 2007, largely in response to the massive inflow of imported consumer goods (particularly toys and food-related items) from China, many of which were proving to be safety hazards to children or, in the case of food, contaminated. The following articles provide some useful background as to the whys and the hows the new US FDA food-safety laws came into being: 'US recalls more toys over lead content', Reuters, October 5, 2007; 'FDA is expected to seek more food-safety powers', Wall St Journal, September 26, 2007; 'US boy scouts recall lead-tainted Chinese badges', Reuters, October 5, 2007.

In a remarkably eloquent letter to the editor of The Gleaner 'Educate workforce first, then provide jobs', (January 27, 2012), P. Andrew Gray, owner of Westmoreland-based Gray's Pepper Products Ltd, provided a very clear assessment of the objective demands that are being imposed on his and other Jamaica-based companies, as they attempt to carve out an economic space within the contemporary world of globalised capitalist production. Gray rightly noted:

"The days of just getting someone off the street to work in factories are fast coming to an end. If we employ individuals without the proper prerequisites, we risk, ultimately, jeopardising our businesses. Factories can no longer look only to the local markets and are increasingly relying on exports. The standards being imposed on us are First World. The fact that we are a Third-World country is irrelevant. This is the reality. Either we conform or get out of the way. The choice is ours."

Mr Gray is acutely aware of the broad implications of the Food Safety Modernisation Act by the US Congress, which became effective on January 1, 2012. He notes that the act requires "documentation of daily activities, many of which will have to be monitored and completed by the line staff on the factory floor".

"The world is demanding a more educated workforce. We talk about creating more jobs, but this cannot be done with the large pool of unskilled workers that are now in the system."

What Mr Gray is saying here is that the industry in which his company is located now requires a larger pool of skilled workers, as opposed to a large pool of unskilled workers, if it is to remain viable and competitive. In light of a recent report stating that "85 per cent of Jamaican high-school students are spurning critical science subjects at the Caribbean Secondary Education Certificate examination level, which means that only 15 per cent of Jamaican high-school students take physics, chemistry or biology (see '85% of students avoid science subjects' Jamaica Observer, February 21, 2012), the prospects don't appear to be very promising.

Companies (the GIEs and the suppliers) are being compelled to make greater and greater investments to ensure product safety at all points of the global supply chain, as they compete for the consumer's dollar. As the cost increases for participation in the global supply chain, more and more companies will be eliminated. This accelerates the process of the concentration of capital in ever fewer hands. This is one of the basic economic laws of capital accumulation. The remaining companies will be larger and will be in a better position to form global partnerships, and also will have greater access to globally oriented investors.

We should keep in mind that the modern tools used in the productive process are not manufactured in Jamaica. The island possesses neither the scientific nor technical capacity to participate in that process.

Jamaica-based scientists and engineers are still very marginal to the process of capitalist production. Science in Jamaica is still a province of the universities; it is not under the hegemony of capital. The modern food industry, for example, is based on very advanced chemistry. In order for capital to be interested in setting up in Jamaica the R&D facilities required for modern industry, it must have access to a large pool of highly trained scientists in the region.

No industry can develop and remain competitive without access to a sizeable surplus of workers, both skilled and unskilled. This surplus army is now a feature of what has become a globally integrated capitalist economy. Unemployment is a natural feature of the capitalist economy. Without that, Jamaica cannot hope to effectively compete for a greater share of the market of a commodity such as coconut water, that is now emerging as one of the beverages of choice in the North American market. (See 'The Beverage Wars Move to Coconuts', Wall St Journal, February 12, 2012).

Like most of these so-called strategic planning documents which have been produced by the technocrats, Vision 2030 is full to the brim with the best of intentions. However, these lofty ideas and prescriptions are not firmly grounded in a scientific understanding of the motion of the capitalist economy.

In the absence of a rigorous analysis of how the capitalist economy actually functions - and what is realistically possible at any given moment in the concrete struggles between the social classes that inform daily life at the local and global level - what we get instead are subjective notions of how capitalism should function.

Rather than serving as a practical guide to the future, these documents actually serve to perpetuate the delusion that socio-historical process can be achieved without concerted social struggles to transform social relations.

Trevor A. Campbell is a political economist. Email feedback to columns@gleanerjm.com and tcampbell@eee.org.