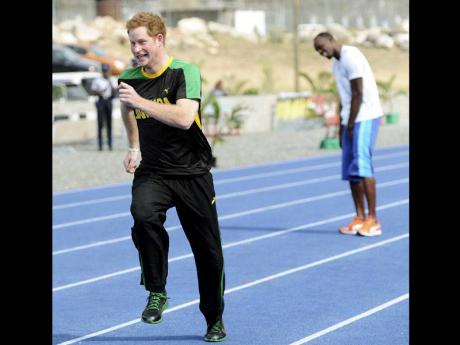 Olympic champion Usain Bolt looks on as Prince Harry sprints to the finish line, after distracting the double world record holder to claim 'victory' at the Usain Bolt Track at the University of the West Indies in St Andrew yesterday. - Ricardo Makyn/Staff Photographer 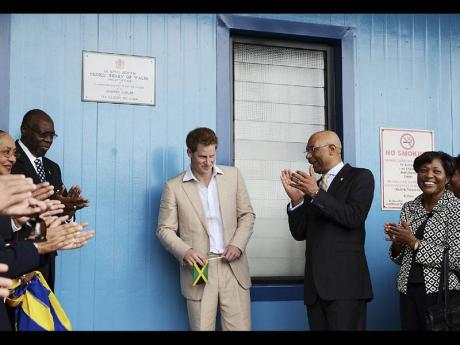 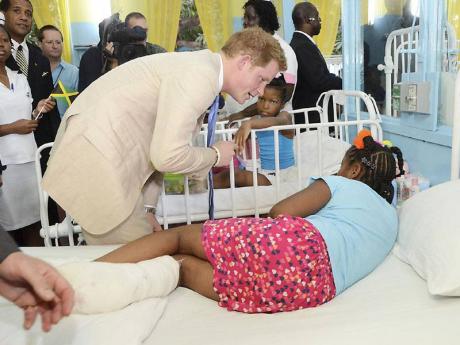 Prince Harry has a chat with a young patient at the Bustamante Hospital for Children in St Andrew yesterday. - Rudolph Brown/Photographer 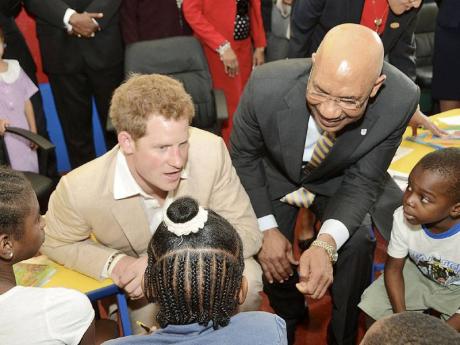 Prince Harry and Governor General Sir Patrick Allen speak with children during a visit to the Bustamante Hospital for Children in St Andrew yesterday. - Rudolph Brown/Photographer 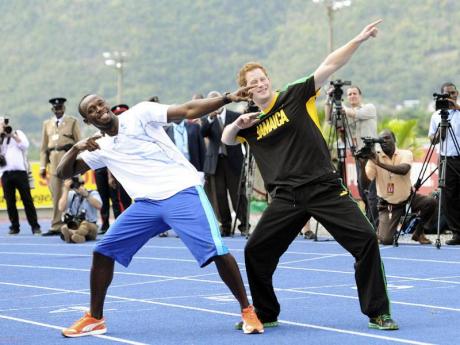 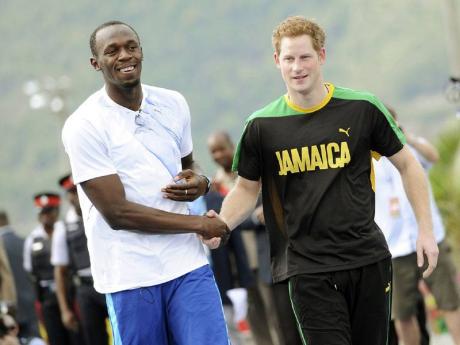 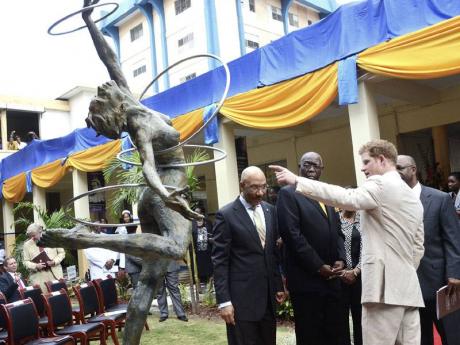 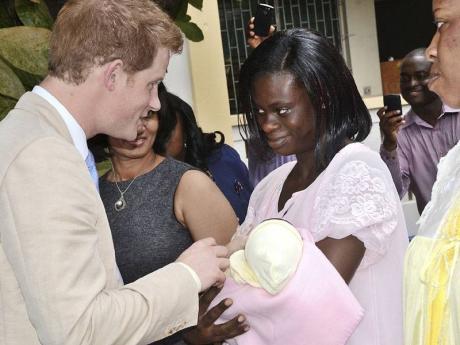 Prince Harry chats with Diane Tomlin and Baby Ayannal, while Patricia Cespedes-Myrie looks on after the unveiling of a statue at the Victoria Jubilee Hospital yesterday.
1
2
3
4
5
6
7
8

International artiste Orville Burrell, more popularly known as Shaggy, says he is quite pleased that Prince Harry is knowledgeable about the work his Make a Difference Foundation has been doing at the Bustamante Hospital for Children in St Andrew.

Yesterday, the prince paid an official visit to the hospital as part of his four-day visit to Jamaica, which marks the occasion of the Diamond Jubilee of his grandmother, the Queen.

"We spoke about the charity and he asked how many concerts were done and I told him three so far. His mother (Princess Diana) was supposed to come here in 1997, right before she died. Chain of Hope had invited her down and he seemed to be very knowledgeable about that," Shaggy told The Gleaner.

Shaggy said the prince's visit did a great service in bringing a lot of international awareness to the children's hospital.

Through his Shaggy and Friends concerts, the artiste has raised approximately $90 million for the hospital and contributed more than 450 pieces of equipment, including ventilators and a sterilising machine.

Governor General Sir Patrick Allen and Lady Allen, Health Minister Dr Fenton Ferguson and other officials accompanied Prince Harry on his tour of the hospital. They later sat with Shaggy and several children in the Learning Activity Centre, where the children sang for them.

Shaggy and the prince exchanged several light moments, full of laughter, with the children, who were quite excited by the visit.

Shaggy said he was pleased by the prince's warmth and reception to the children, who responded in like manner to the visit.

Prince Harry started his day at the Usain Bolt Track at the University of the West Indies (UWI) and was later made an Honorary Fellow of UWI at the law faculty.

After lunch with Prime Minister Portia Simpson Miller at Devon House, the prince visited the Victoria Jubilee Hospital and Rise Life Management Services in Kingston, among other official duties. The evening ended with a reception and dinner at King's House.

Today, Prince Harry will be participating in military activities at the Jamaica Defence Force's Up Park Camp headquarters in Kingston. Later he will head to William Knibb Memorial High School in Falmouth before touring the Falmouth Pier, among other duties.