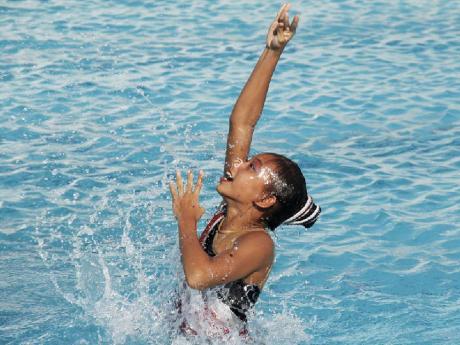 The competition, which was held at the National Stadium pool, saw some 22 swimmers competing in 16 events and seven categories, including novice, intermediate and age group figures and routines, as well as masters solo routines. The competitors included the 13 swimmers from IAS who qualified for the Carifta Synchro Championships. The 2012 Carifta Championships has been cancelled.

The swimmers welcomed the opportunity to have some well-needed competition, which saw all improving their scores after the Carifta trials in January and the ASAJ development meet held in December. Local synchro coaches, Olga Novokshchenova, head coach of IAS Portland and double Olympic gold medallist for Russia, and Jun Tochino, head coach of IAS Kingston and former Japan Junior Olympics team member, were both pleased with the performances of their swimmers.

In the age group category, the high point trophy went to Charlotte Ausan of IAS Portland with four gold medals and the maximum 54 points, while the novice and intermediate high point trophies went to Dejonai Willis and Renée Johnson, respectively, both of IAS Kingston. Other individual gold medallists included Mikalan Ballentyne for 13-15 novice figures and routine, as well as Shernet Swearine-Gullotta for 12 and under age group figures, and Dajone Leslie for 12 and under age group routine.

The age group category had the highest number of entries and was the most competitive. The age group 12 and under duet of Dajone Leslie and Shernet Swearine-Gullotta topped that event, while Charlotte Ausan and Janielya Shaw won the age group 13-15 duet.

The highest scores were recorded in the Masters Solo Category, which included Novokshchenova swimming for Island Aquatics, and Virginie Chevalet of Synchro Paraguay. Novokschenova won the gold, while Chevalet took silver.