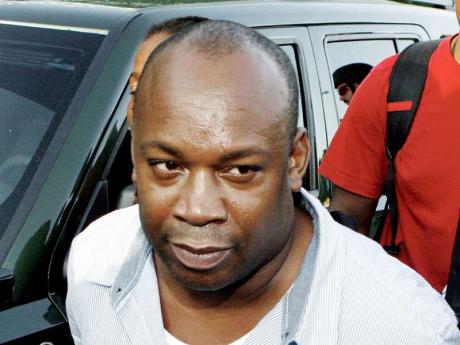 There is no shortage of songs about reputed dons and gangsters in Jamaica done when they are in their heyday, but doing a song about a former name-brand bad man who has gone the time-honoured route of long-term incarceration or violent death is another matter.

Like all things, support and accolades are strongest when the object of respect is strong, but invariably fades rapidly when they have fallen off their pedestal.

In this regard, Horace Andy's song for Christopher 'Dudus' Coke on the album he is now working on from his Charles Street, Kingston, studio is unusual, as it comes at a time when Coke is in the United States awaiting sentencing. Still, Andy sings:

"Dudus we know a you rule

Presi we miss you

Things no calm since you gone

The people them nah live right

In a recent interview with The Sunday Gleaner, Andy said "the song is just a song about the man. Is no political thing." And the statements he makes about the community in Dudus' absence, Andy said, are simply a matter of "I write the truth, what I see".

The song speaks about Coke's absence from the community, while maintaining his presence in the present tense assertion of his leadership. On the other hand, deejay Supercat's Sandokhan is clearly an ode to the departed, as it is in the past tense.

Supercat sends out general respects to some of the customary areas:

"Special request to all Firehouse man

Uptown an' Garden an down a Paynland"

And then he zeroes in on the man who was at one point in the late 1980s the most wanted man in Jamaica, with a $50,000 reward on his head and the subject of intense security searches. He deejays:

Him born inna de ghetto an no trouble no one

Wayne 'Sandokhan' Smith (not to be confused with Hopeton 'Sandokhan' Brown from Canterbury who was on the Federal Bureau of Investigation's Most Wanted List, killed by the police in Lilliput, St James, in March 2004) was the target of a major manhunt centred on Waterhouse, St Andrew. This was after a pre-dawn attack on the Olympic Gardens Police Station on November 19, 1986, in which three policemen were killed and rifles stolen, him being held about to leave the island from Montego Bay and an escape from the Gun Court. Then there was recapture and escape from the then St Catherine District Prison on June 15, 1988, where he was on death row. Sandokhan was eventually killed by gunmen in Tower Hill on September 8, 1988.

The Gleaner reported that the police station attack had such an impact that then Leader of the Opposition Michael Manley, who was out jogging when the news broke, jumped into his vehicle and immediately went to the scene.

Supercat's summation of Smith not troubling anyone seems to be borne out by reports about the events leading up to the Olympic Gardens station attack. He was known as a marijuana dealer and, while he was riding with his wife on a motorcycle in the community that fateful November, the police tried to apprehend him. Smith escaped, but his wife was held and taken to the Olympic Gardens Police Station where she was allegedly physically abused. This included slaps to her face.

The allegation was made in a letter by Smith to Roman Catholic priest Father Richard Albert.

The following night, Sandokhan and his associates attacked the police station, which Supercat records in his song:

"Say him screechie over fence an go inna station

Kill three policeman an' him wounded one"

He also speaks to the futile hunt by the security forces for Sandokhan:

Within two months of his second escape, Sandokhan was accused of nine murders. That may or may not have been on Supercat's mind when he deejayed the lines:

You shoulden provoke the escape con"

At the end of it all, though, what remains is Sandokhan's reputation, which is part of Jamaica's extensive gangster lore. Supercat pays homage to this, with "rough, rough Sandokhan/tough, tough Sandokhan/wild, wild Sandokhan".