3 million-plus cheers for The Queen 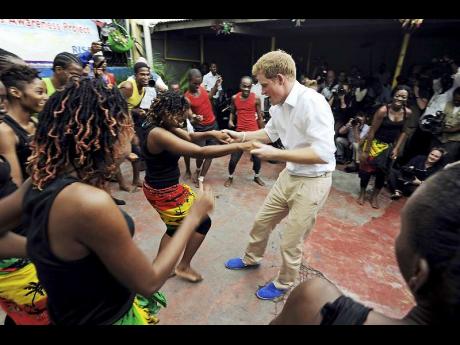 Britain's Prince Harry dances with a girl during a visit to the non-governmental organisation RISE Life Management Services in Kingston last Tuesday. - AP

"Puma on track for millions of pounds' worth of free publicity as images of Prince Harry posing with Usain Bolt go global." - The Guardian, March 7, 2012

Well, however much that tiny logo on Harry's shirt earned Puma, it cannot be close to the windfall that big Jamaica on his chest brought to this country. No doubt the picture and video of King Usain and the Prince doing 'the arrow' will also be a poster child for the 2012 London Olympics.

The entire Jamaican tourist industry must be grinning ear to ear, and those myopic 'stop waste the $3 million pon white man colonialist and feed poor people' grandstanders must feel rather foolish now.

For the country has reaped the kind of positive publicity money simply can't buy. Scenes of the dance group spontaneously getting Harry to join them in jamming to One Love were priceless advertisements for Brand Jamaica - 'a country so vibesy and full of fun, not even a prince can resist joining in!'

The cheering crowds lining the streets to see Harry revealed very little anti-monarchy sentiment in the common Jamaican. Political talk about holding a get-rid-of-The-Queen referendum will remain just that. Even the most rabid republican must realise it would be sheer economic stupidity - and not only for Jamaica.

The strongest argument for Britain itself remaining a monarchy is also economic, for the two longest-lasting and biggest brands on earth are the Pope and The Queen. Now there are lots of other queens and kings around, but The Queen always refers to Elizabeth II. (When King Farouk of Egypt was deposed in 1952, he quipped that soon there will only be five kings left - the king of spades, hearts, diamonds, clubs and England!)

There are many historical reasons for this, including the United States also once being a Commonwealth realm. Another is that the British monarch is the only one who reigns over other countries. There are 15 to be exact - Antigua, Australia, The Bahamas, Barbados, Belize, Canada, Grenada, Jamaica, New Zealand, Papua New Guinea, St Kitts-Nevis, St Lucia, St Vincent, the Solomon Islands, and Tuvalu. The 16 current realms have a combined population of 135 million, all of which, except about two million, live in the United Kingdom, Canada, Australia, Papua New Guinea, New Zealand and Jamaica.

Now not many people know much about Papua New Guinea. Australia, Canada and New Zealand are all pretty much British clones, so having a British queen seems not so remarkable. But Jamaica is 90 per cent black, one of the world's most culturally dynamic countries, and famed for its strong sense of self-identity. Why in the world would it still have a white queen who lives thousands of miles away? It makes absolutely no logical sense, which of course makes it wonderfully intriguing to outside onlookers.

That is why Jamaica keeping The Queen as head of state is such a beautiful fit for both us and our former colonial masters. Whenever royalty visits, our roads and hospitals get fixed up, and the horde of reporters in tow gives our natural beauty and vitality massive worldwide coverage.

While Prince Charles wearing a Rasta tam, and now Harry racing Bolt and dancing to reggae while big crowds of regular Jamaicans cheer him on, makes the British monarchy seem cool and modern and loved and relevant. The brand boost the monarchy gets from Jamaica having a British queen makes whatever the Privy Council costs the Brits seem a pittance. No other Commonwealth realm can give Britain and its monarchy the planetwide street cred Jamaica does.

As a lady in the Gleaner online comments puts it: "When I was young and The Queen came, we had to dress up in red, white and blue. Now Prince Harry is wearing our black, green and gold. Instead of us trying to impress him, he is trying to impress us - and that is wonderful!"

Critics will say this bottom-line analysis ignores crucial racial and political dynamics. While the British have obviously improved their race relations - London is one of the most racially mixed and miscegenous cities on earth - many who once suffered their slights still feel resentful. My father still testily relates tales of the blatant colonial superiority-complex racism he had to endure.

In the end, it's the Jamaican people who will decide whether we get rid of The Queen. So far, there is little evidence that they wish to. No poll has ever shown a majority wanting to become a republic, and every visiting Royal family member has got a rousing reception from big crowds lining the streets.

Some view such scenes with disdain while muttering about 'ignorant servile masses'. But historians say this affection for the monarchy goes back to Emancipation, when the freed slaves commonly believed it was Queen Victoria who had freed them. Though factually incorrect, there is folk wisdom here. Had it been left to the Jamaican planters, the slaves would forever have been in bondage.

In a sense, freedom was granted because the British Establishment, whose head was The Queen, overruled the Jamaican planter class. (Though, of course, the bravery of Sam Sharpe and those he led forced the issue). Ever since, the Jamaican common man has seen ties with Britain as a bulwark against the local political class going off the rails. Based on vox pops, for instance, there is little chance of the leave-the-Privy-Council side winning any referendum. Jamaica and Britain will one day part ways completely. But as they say on the streets, 'we nuh ready yet'.

Why this is so, well, we can argue forever. Perhaps dividing the ruling political class into an elected working one and a ceremonial hereditary one makes it both more efficient and secure.

Whatever the reason, constitutional monarchy Jamaica - with all its faults - remains one of the most stable democracies on earth. Why fix what ain't broken?