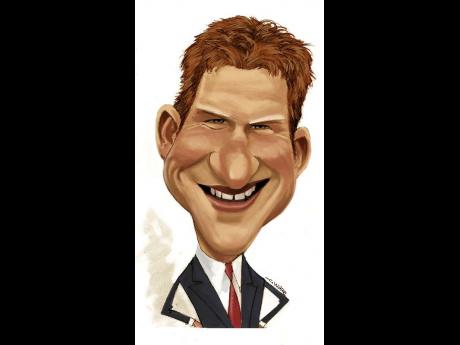 In he flew on the iron bird and travelled in the covered chariots. This prince, the heir of King Arthur's legacy, wielded no Excalibur, the magic sword, but into the land of the Mercury, the god of speed with wings on his feet, did he venture.

And lo, Harry, with the hair of fire, the second begotten of he who shall never be King, touched on the azure carpet where many African gladiators fought and died for freedom. With a speed swifter than a lightning Bolt, he vanquished him, taking the title of the quickest creature back to his mother's land where the superior race of demi-gods abides.

Hopefully, someone logical will recognise that the pictures of Prince Harry beating Usain Bolt at the University of the West Indies were simply a stunt and will not redound to the British penchant for mythifications. It's not funny, because we have no control over history after the British historians have written it, when we all are gone to the great hereafter. I am not saying that the English tell lies. No! They create legends which defy history, geography and biology.

First of all, the English coat of arms has two creatures which cannot be found in England unless one falls asleep and has nightmares. On the left is an African lion, and on the right, a unicorn, a creature of Roman mythology but which strangely exists in the Bible. None of these animals is to be found in England, yet on top of the crest is another lion.

The tempting conclusion of my Rastafari 'bredren' must be that it is prophetic, all humans are originally African, and when Haile Selassie, the Lion of Judah, went into England in 1954, he was claiming his kingdom. As amusing as it might sound, a country which takes non-native and imaginary animals as its symbols must have a major control over reality. Furthermore, its patron saint, my beloved St George, slayed a dragon, and not that which is brewed here. If one can believe that, one can deny that the rats which are plaguing the city of Kingston did not originate from Europe.

Nevertheless, at least the coat of arms of Henry VIII, the adulterer and sexual pervert, had the dragon but appropriately a dog on the right side. So it was closer to reality. Our own emblem has the displaced Tainos flanking the shield and a native crocodile on top. True to form and matching the approach of governments since Independence, our motto at the bottom has 'out' and 'people' at the lower extremities. So let us now be true to history.

Because we are so poor and black and have been unimpressive in our economic achievements since Independence, the tendency is to suggest that we were given the necessary tools by a benevolent former master and failed miserably. On the other hand, the motherland supposedly built its empire on its own resources. Prince Harry's country did not reach where it is on its own. It rode on the back of its colonies. Like a horse which is ridden to exhaustion, they were left with little energy to go on.

Jamaica was not Britain's thoroughbred; it was England's mule, a resilient hybrid stronger than both the Africans and the British. This artificially created society was one of the main reasons for Mother England's take off into the well-recorded Industrial Revolution. Long before we wrote our own history, Joshua Gee, a 1720s British writer, observed, "All this great increase in our treasure proceeds chiefly from the labour of the negroes in the plantations."

Former Trinidadian Prime Minister Eric Williams, the brightest political leader this region has known, outlined in Capitalism and Slavery, in deep detail, how the Triangular Trade enriched England and made her more powerful and richer than the Seven-Star General.

Jamaica produced sugar, cotton and other primary products cheaply, and exported them in their crude form to England. This became the fuel and inputs for British industry in a Europe which was more addicted to sugar than politicians are to truth. From England, the ships, laden with manufactured goods, proceeded to Africa, where the goods were then exchanged for Africans who were then enslaved. The human cargo was then shipped to Jamaica which served either as final destination or as trans-shipment port for others who were to be sold elsewhere for a profit. Jamaica was the main base for the English slave trade. And we supplied first- and second-generation Africans to other colonies in the Americas.

Sugar led to massive industrialisation in Britain. Midsize towns such as Liverpool and Bristol became sprawling metropoles based largely on this trade. Indeed, estimates are that at the height of the Industrial Revolution, more than 20 per cent of English GDP came from little Jamrock, the land of wood, water and British exploitation.

I hope someone gave Harry a copy of Williams' book, From Columbus to Castro, because despite his not having gone to university, he must be a reading man and will have a greater sense of appreciation and gratitude for what we did for him. Even into the 20th century, we sent thousands of Jamaicans to fight in the 'European Civil War' between 1914 and 1918 and the real 'First' 'World' War between 1938 and 1945.

Thus, when we ask his country for reparations and more economic assistance, his prime minister shouldn't use the myth of our being anti-gay to not give us what is due to us. By the way, hopefully he was also told that, as I said last week, Parliament has already conspired to decriminalise buggery, so they can free up the pounds.

England had better, because although Harry runs as if he has false legs and could only beat Bolt if he were bionic, this $6-million man must pay dividends. So far, 'mi spirit tek him' because like 'real thugs' he uses his alias instead of his name Henry. He wears Desert Clarks shoes. Unlike his older brother William, he is a real soldier, a 'top shotta' who went into real combat and was not fazed by the shootings which flared inexplicably as he arrived here.

Like so many black men today who have special talents or privileges, he never attended university. Add to that the intriguing fact that he looks nothing like his father, who is confined to formal jackets rather than kingly robes, and he looks even less like the royals and more like the commoners. Indeed, Harry doesn't resemble his mother either. He has red hair, his mother was blonde and his father had black hair before it turned grey.

In this country where 80 per cent of children are born out of wedlock and where more than 30 per cent of fathers who accept paternity 'fail' the DNA test, Harry seems right at home. Despite denials to the contrary, he is rumoured to have rogue genes from James Hewitt, with whom Diana had an admitted affair. Though Hewitt denied parentage, as he would have to, Harry looks like the 'dead stamp of him'. Wouldn't it be funny if Hewitt's red hair is linked to a recessive African gene?

I take the liberty of writing this bit of history as the British have done to us. My expectation from Harry is that he and the press which followed him here will say how well we have done despite their historical 'sucking off' of our resources to 'big up' themselves, and that we are a hardy and proud people who are not mendicants, though like them, we are sometimes mendacious.

By the way, is it true that a politician hugged him and said, "You grow big, eeeh. How you granny?"