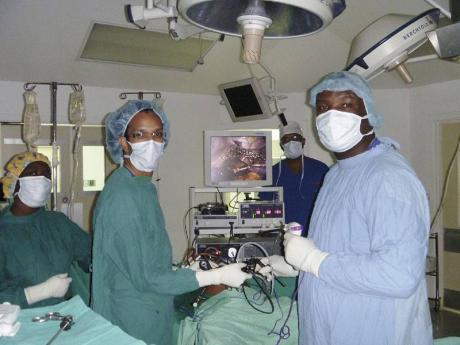 Dr Patrick Roberts (right), surgical oncologist and hepatobiliary surgeon at the University Hospital of the West Indies, in St Andrew, and his team successfully perform a laparoscopic liver resection last month on 34-year-old Patricia Walker, who was diagnosed with a liver condition - hepatic adenoma. - Contributed

Two years ago, 34-year-old Patricia Walker* was diagnosed with a liver condition - hepatic adenoma - and was fearful she would have died before having the required surgery.

The procedure was delayed and, added to that, she was worried she would not be able to find the hefty sums the procedure would cost overseas, given that it was not offered in Jamaica.

"I had some discomfort under the right side of my ribs so I was sent to do an ultrasound and it picked up that a tumour was on my liver, but I was pregnant at the time so nothing could have been done about it," Walker said.

"It was a benign tumour, but the risk involved with this tumour is that it could rupture at any given time, which would result in bleeding and I could bleed to death. It was a very scary experience for me, the worst would come to mind."

But while going through life, she said she held on to faith and prayed a miracle would happen so she could be rid of her illness.

Indeed, her prayers could have been considered answered as by the time she was ready for the surgery, her financial worries had been lessened.

Walker was able to get a laparoscopic liver resection done last month to remove the tumour, making her the first person to have had the procedure done in Jamaica.

The procedure, which was done for the first time anywhere in 1992, has only been performed in 3,000 documented cases worldwide to date.

"It is really faith in God that kept me going. I have two young children and I would want to live to see my children grown. So I basically put my life in God's hand, a lot of prayer went up for me and the support was great. A lot of persons stood by me throughout my illness," she said.

Walker said she has a lot to be thankful for, including the work done by Dr Patrick Roberts, surgical oncologist and hepatobiliary surgeon at the University Hospital of the West Indies, and his team who successfully performed the surgery for her.

"I am giving thanks for life because the doctor said when they went inside to remove the tumour it got so thin that within days it would have ruptured and I would have bled to death.

"Dr Roberts helped me to get through it as well. He is very professional in what he does and he made me comfortable. He was always there to reassure me that I would be fine," she added.

The surgery amounted to $1.5 million which, she said, would have been far more if she had to do the surgery overseas.

"I am also giving thanks to Dr Roberts for coming back to Jamaica right on time. He told me that people would have to spend a lot of money to go abroad to get the surgery done, but I am lucky to get it done here," she added.

Roberts, who learned how to perform the procedure in Canada where he did his fellowship training, took his achievement in stride while speaking with The Gleaner recently.

He said, however, that it was a technical procedure and that he was elated it was successful.

"I really don't feel any way to be the first doctor to do this in Jamaica. It was an excellent bit of work and I see it as a major achievement that we have got it done," he said.

"Normally for this type of surgery, it would require you getting a big incision but, because it was laparoscopic, she just had four small incisions. So the type of incisions she got were very small compared to the usual, so it reduced the pain normally associated with this procedure," he explained.

"It was not the first liver resection I was doing since I have been back, but it is the first one I am doing laparoscopically. I am very proud of the achievement and I plan to continue doing it. Normally, people would have to travel overseas to get a liver resection, but since last year we have really started doing it," he added.

He praised the team of doctors and nurses who worked along with him to complete the surgery successfully.

*Name of patient changed upon request.