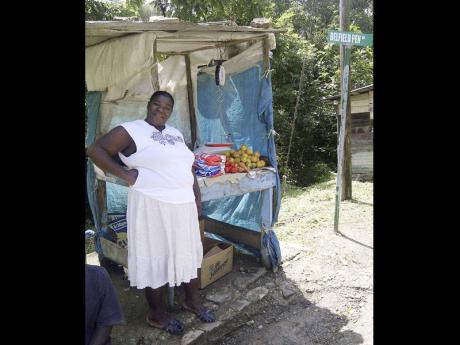 Paulette next to her stall in Belfield, St Mary. Photos by Robert Lalah 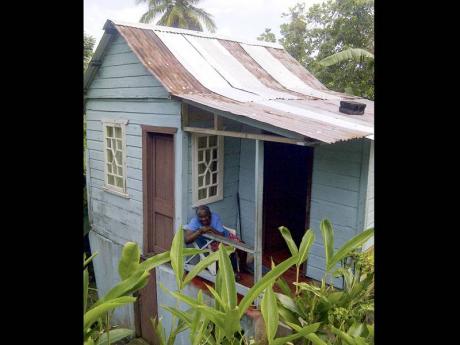 The friendly Miss C at her house in belfield, St. Mary 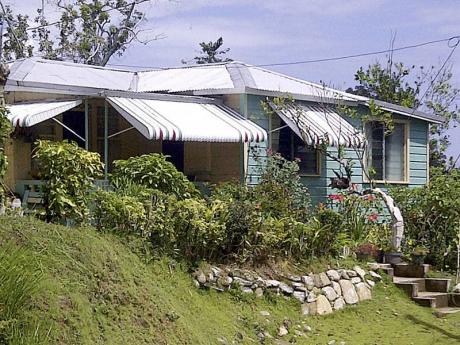 The man stuck his head out the window and looked at the ground. His eyebrows arched into a scowl. "Shi fowl!" he shouted, waving his hands in front of him. Four or five hens and roosters that had been casually roaming the roadway suddenly scattered. They all went in different directions. Every fowl for himself.

The man looked up and saw me.

"Have mi excuse yah bredrin," he said. "Dem chicken yah ah mess up di place." I walked up to the window of the house. It was a wooden house, painted yellow and white. Lots of colourful flowers were planted in the yard.

The man, a portly fellow with a wrinkled forehead, told me his name was Rick. He was the first person I met since I arrived at Belfied, St Mary that morning. I introduced myself to him and asked what he was doing inside on such a fine day. The sun was out and there was a cool breeze. Rick chuckled.

"Hee hee. Mi go bush from morning, man," he said. "Is late hours now. Mi just come in fi hold a fresh and lay down likkle," he said. It turns out that Ricky is a farmer. He told me his farm isn't very big but has bananas, peppers and plantains.

"Mi really plant fi sell, but most time mi eat from di farm," said Ricky. As I stood talking with him at the window of his house, I could see into his kitchen. There was a pot bubbling on the stove. Something smelled good. A calendar from 2004 was hanging on the wall. A half-peeled potato and a knife were next to the pot.

Rick told me that he goes out to work on his farm before sunrise and usually gets back home, cooks and is fast asleep before noon. I glanced at my watch and realised that it was already 11 o'clock. Not wanting to interfere with the man's routine, I thanked him for his time and moved along.

I headed up a winding roadway. There were bamboo plants on either side. I heard a holler.

"Howdy do!" someone said. I looked to my right and noticed a house painted blue, white and brown. A smiling woman was sitting on a porch of sorts. She waved me over.

Soon, the friendly woman, Miss C, and I were shooting the breeze together. I asked her how long she had been living in Belfield.

"I move out for a little while, but soon I had to return. There is no other community like Belfield," she smiled. Miss C told me that her children are all grown and have moved to Kingston. She however, won't be following.

"No sah!" she exclaimed. "I can't live in the city. It too hot and too much noise. People don't live good in those places. I prefer Belfield where people live good with each other. It is like one family," said Miss C.

Every few minutes someone passing by on the road would call out to her. She would reply with a holler of her own and a wave. I told Miss C of my conversation with Rick and that he was by then, probably well into his meal.

"That is the other thing that I love about Belfield," she said, her eyes wide. "You will never go hungry in Belfield. I don't buy food. Everything I want is right here and a neighbour is always willing to give you what you want and you do the same for them," she said. "That is how people supposed to live. Each one help one."

After a while, I said goodbye to Miss C and headed further up the road. There I met Paulette, a jovial woman dressed in white. She was sitting next to a wooden stall on which there was an odd mix of items - laundry detergent, bathing soap, oranges, tomatoes, carrots. Paulette was very friendly. "Welcome, sweetheart," she said. "Is first I seeing you in Belfield, darling. How you find it, sweetness?" she said. An elderly man sitting on a rock nearby chuckled. I told Paulette that I was doing well and that I was enjoying my time in the community. "Yuh welcome here, darling," she said. I thanked her and asked her what life was like for her in Belfield.

"It very nice, sweetheart. It very nice. People here live good," she said. "Is a place where people don't believe in the fussing and fighting. It really good, darling. It good fi true."