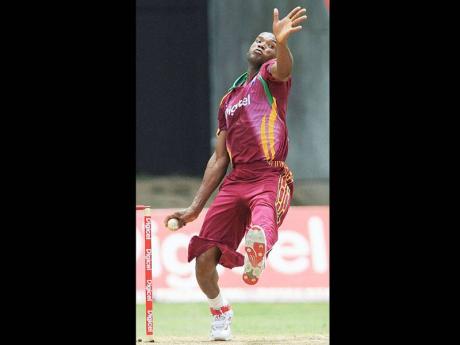 Jamaica stretched their lead at the top of the West Indies Cricket Board Regional Four-Day Tournament standings after they crushed Trinidad and Tobago by 192 runs on the final day of their fifth-round match here yesterday.

Medium pacer David Bernard Jr captured seven for 23 as Trinidad and Tobago, set 305 to win at the start of the day, folded meekly for 112.

They seemed to be making a fight of it when they rushed to 59 without loss, but they lost 10 wickets for 53 runs to hand Jamaica victory at 1:40 p.m.

"We need to bat for long periods and this did not happen. We needed partnerships and we needed for the batsmen to apply themselves to the situation at hand," captain Reyad Emrit lamented afterwards.

Justin Guillen top-scored with 40, stroking four fours and a six off 54 balls, as he partnered with Imran Khan (14) to get T&T off to a sound start.

However, his dismissal - playing back to leg-spinner Odean Brown and falling lbw - sparked a slide from which T&T never recovered.

With no run added at 59 for two, Khan was lured out of his crease by left-arm spinner Nikita Miller (2-15) and stumped by namesake Horace Miller.

Marlon Barclay (15) and Jason Mohammed (nine) seemed to be rebuilding the innings in a 23-run, third-wicket stand when Bernard turned the game into his personal show.

Mohammed walked across his wicket to give the former West Indies seamer his first wicket and T&T collapsed spectacularly as the next eight wickets fell for just 30 runs.

Aneil Kanhai edged Bernard to Danza Hyatt at first slip at 84 for four and with no addition to the total, Barclay was trapped lbw by Nikita Miller.

Bernard then claimed the last five wickets to fall.

A Kanhai c Hyatt b Bernard 0