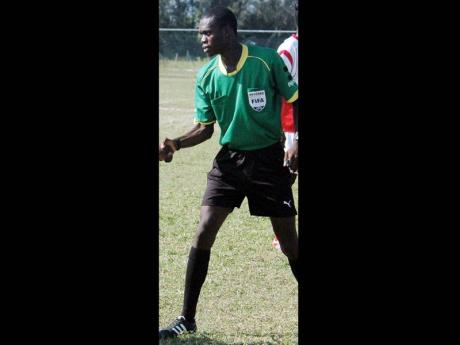 Ball artistry took a back seat in the Red Stripe Premier League game between title hopefuls Waterhouse and top-six aspirants Harbour View at the Harbour View Mini-Stadium on Sunday, as refereeing decisions were placed under the microscope.

With the score tied at 1-1, referee Valdin Ledgister awarded his third of three penalties in the 93rd and final minute to home team Harbour View, shocking even the partisan Harbour View crowd and prompted vigourous protests from the Waterhouse players, sections of their bench and supporters.

That protest lasted for close to 10 minutes as the Waterhouse players, who felt hard done, made it clear that they would have none of it.

Their protests appeared justified as captain Rohan Amos's muscular challenge on the dangerous Kimorlee Brissett was perfectly timed, looked and sounded as if he got all ball.

Amos was in fact being praised for an excellent tackle, only to look at referee Ledgister and see his finger pointing to the penalty spot.

The protests erupted immediately after and included the ejection of Waterhouse midfielder Hugh Howell, for verbally abusing the referee.

After a number of attempts to persuade the players to resume the game, Ledgister consulted with his assistants and a decision was taken to reverse the call and correctly awarded a corner kick.

Ledgister rolled the ball towards the corner flag.

Ledgister's final whistle signalled the turn of the Harbour View party to vent their dissatisfaction as the players trooped off the field.

"This is what I have never seen in football. Regardless of the situation a penalty was awarded and then after 20 minutes it was reversed. It was unexplainable," Harbour View's head coach, Donovan Hayles, blasted at the end of the game.

"From where I stand, I don't think any of the penalties were penalties. We have suffered from bad calls too, but the game has to be played," Hayles added.

Waterhouse's assistant coach, Marcel Gayle, who stood in for the very upset Donovan Duckie - who almost blew his top during the delay as he vented his disgust with the officiating, even stating that he was quitting as he could not take any more of this type of football - was very calm.

"The referees are in control of the game. Observing from the bench, it was too far to see exactly what took place," Gayle, who had a smile on his face throughout the disturbance, said of the controversial penalty call.

While his team Waterhouse dropped two valuable points in the process and could lose even further ground to runaway leaders Portmore United, Gayle was not disappointed with the result.

Hayles found it difficult to comment on the game itself.

"I think we dominated the game, but it is very difficult to discuss the game after what took place. I can see no other way than for us to be awarded the points," Hayles said, hinting that his team will be protesting the outcome of the game.

Jermaine Hue had opened the scoring for Harbour View from the spot in the 60th minute and Jermaine Anderson replied for Waterhouse in the 75th minute, also from the spot.

If the result stands, Waterhouse will remain in third position with 45 points, 12 behind Portmore United which were due to play second-place Boys' Town last night, while Harbour View on 38 points climbed above Montego Bay United, which lost 0-1 to Sporting Central.