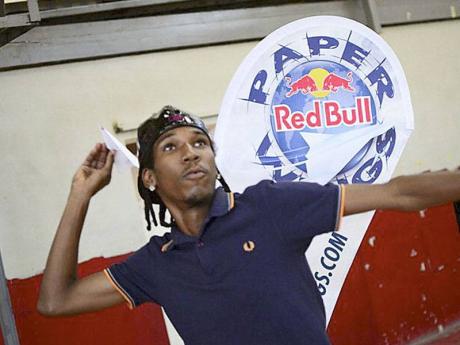 A contestant gets ready to let fly his paper plane during the qualifiers for the Red Bull Paper Wings competition. - Contributed

Scores of paper plane enthusiasts will be seeking their wings when they compete in the Red Bull Paper Wings local finals today at the University of Technology's (UTech) auditorium, starting at 3 p.m.

The 27 tertiary-level finalists proved their flying skills during three qualifiers held on Thursday, February 9 at the University of the West Indies Gym; Tuesday, February 28 at the Mico Teachers' College; and Thursday, March 1 at UTech.

Winners from this local leg will receive a direct pass to the regional finals, where they will compete to represent the Latin America and Caribbean region in a face-off against thousands of other international paper plane pilots in the World Finals in Salzburg, Austria next May.

Local winners will also get the chance to soar through the skies when they enjoy a Chukka Caribbean Zipline Canopy Tour in Montego Bay as part of the prize package.

The goal of the competition is to fly, not land, and all it takes is a piece of paper, imagination and the will to fly. The exact design of the plane - to be created from ordinary A4 paper - is of less significance than it's ability to travel the longest distance and produce the longest airtime; two of the three judging categories. Acrobatics is the third criteria, which looks for the plane's ability to perform fancy flight techniques while in motion.

All forms of assistance or supplementary devices are forbidden in the 'longest distance' and 'longest airtime' categories. However, the hobby engineers are allowed to use scissors, glues and other material solely in the 'acrobatics' category.

Do you want to take off too? Do you think you're the expert in paper plane fold design and have the creativity to propel dynamic acrobatics? Or do you have the right-arm strength for the long distance or longest airtime flights? Then sign up for the qualifier in your university by visiting www.redbullpaperwings.com. But remember, the goal is to fly, not to land.