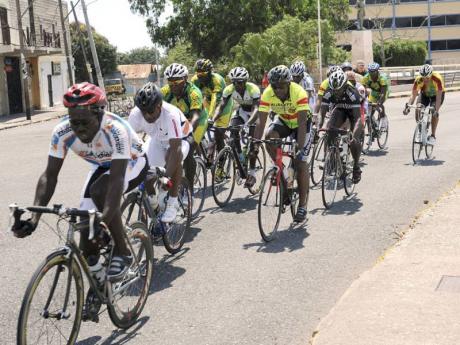 Cleveland Sharpe leads the field during going-into-the-bell round as he goes on to win the 10-lap Masters 40-and-over contest, during the ninth annual Harold J. Brissett Memorial Classic around Heroes' Circle, Kingston, on Sunday. - Norman Grindley/Chief Photographer

Hill, who represents Nortilius Cycling Club out of Portland and last year made his debut for Jamaica at the Caribbean Cycling Championships, won the event ahead of Montego Bay's Horace McFarlene, who represented Ward's Power Team, and teammate, Peter Thompson.

"It was a team thing, as we came with a game plan and it worked out well," said Hill, who trailed McFarlene and Thompson for 12 of the 20-lap event before making his move.

"With eight laps to go, when I made my move I felt like a new man, like I had not been riding from this morning and this I think carried me through."

The race, which was held in a constant drizzle and watched by members of the cycling fraternity as well as residents from the surrounding areas, was one of seven that was held on the day.

Denton Durkey, a resident from one the neighbouring communities, took home the All Comers title, which was held over three laps, and to add a bit of fanfare were cyclists from the Jamaica Constabulary Force.

"The event was an overall success, given the fact that the country is in a recession and yet still a number of sponsors, including Scotiabank, Wisynco Group, GAV Imports, Unique Living and Cycle City, and Fitness Centre, who went into their pockets to make it happen," said Winston Brown, meet organiser.

"Even the riders must be credited as we had cyclists all the way from Montego Bay, Mandeville, Portland and St Thomas, which themselves would have to endure costs.

"We now look forward to next year where we hope it will be bigger and better," he declared.