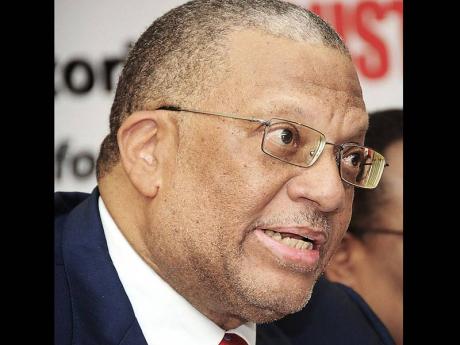 Jamaica has registered with the Securities Exchange Commission (SEC) its plan to float up to US$1 billion (J$87b) of debt in the United States market to finance its budgetary requirements.

The prospectus did not reveal a timeline, type and yield for the debt.

"Jamaica may sell, from time to time, any of the debt securities described in this prospectus in one or more offerings up to a total US dollar equivalent amount of $1 billion," stated the prospectus dated March 9, addressed to the SEC.

"The debt securities will be direct, general, unsecured and unconditional obligations of Jamaica."

The bond will be available in the US market, which market sources say appears to be different from previous filings.

Previous SEC filings seen by Wednesday Business have overtly stated that the bonds are not for distribution in that market.

Brokers were unwilling to weigh in on the implications without an explanation from Finance Minister Dr Peter Phillips on his strategy, but say the move has raised questions on what it implies for the ongoing IMF talks and budget targets.

Phillips did not return calls for comment, and questions submitted to the finance ministry were unanswered up to press time.

Specifically, Jamaica budgeted its borrowing for the fiscal year 2011-12 at J$140.7 billion (US$1.6 billion) of which J$97 billion came from the local capital market, according to finance ministry budget documents.

The country's external debt was last estimated at US$8.6 billion in December.

Requests for comment from the finance ministry were unanswered up to press time.

Tapping into US market

The head of a top investment house, who spoke on condition of anonymity, said the move reflected a shift by Government to tap deeper into the US market amid the tightening up of the eurobond market, as the European debt crisis plays itself out.

The equivalent of US$259.6 million of eurobonds are due to mature this year.

"I guess that they are preparing to refinance the euro-denominated bonds coming due shortly. Europe is currently in a 'risk off' mode, so likelihood of refinancing those bonds in Europe may be poor. No appetite there for Jamaica," said the investment expert.

"US market probably has more liquidity, and the adviser would likely recommend that GOJ refinance the maturing euro-debt in US dollars."

The source added that the maturing Eurobonds were largely bought by European account holders, and since Jamaican institutions have little euro liabilities, local appetite would be weak for bonds denominated in euro currency.

"Jamaican investors tend to prefer US$-denominated bonds as they have more liquidity, and while the size of the registration will come as a bit of a surprise to the local market, it makes sense if they plan to go to tap the market again for additional funds, depending on the receptiveness by investors to any new proposed offer."

Jamaica up to now had largely retreated from the international capital markets. The majority of its overseas borrowings in the past three to four years were from multilaterals and bilateral sources, which offered credit at cheaper terms.

However, the derailing of the IMF agreement appeared to have changed the dynamics last year. The filing of the prospectus signals that the current government plans to ramp up borrowing on the capital markets.

The SEC registration follows the announcement last week that Jamaica, with the help of the World Bank, also plans to structure a diaspora bond to raise development funds for investment in education and helath, but would also be used potentially to retire debt.