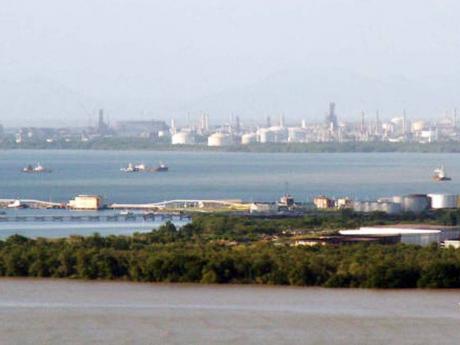 The Point-a-Pierre harbour is seen in the foreground in Trinidad's capital and seat of government, Port-of-Spain, as seen on the website gstt.org.

Trinidad and Tobago has signed a Memorandum of Understanding (MOU) with Panama that the Kamla Persad-Bissessar government says underscores its "goal of aggressively pursuing new markets".

Persad Bissessar, who is leading a delegation to Panama, said an invitation has also been extended to Panamanian head of state Ricardo Alberto Martinelli Berrocal to pay a state visit to Port-of-Spain.

A statement out of Port-of-Spain said Berrocal has accepted the invitation and the visit could take place as early as May.

"Both sides publicly stated that the visit and the meetings were extremely successful and will lead to beneficial outcomes for both countries," the statement said.

It said that the MOU in the energy sector will facilitate mutually beneficial trade and export of propane, butane, bitumen, natural gas, cement, ceramic tiles, clay tiles, steel products and other goods manufactured in Trinidad under preferential tariff arrangements with Panama.

Trinidad said a Partial Scope Trade Agreement, which was over six months in the making, was also initialled by the vice-minister and chief trade negotiator of the Republic of Panama, Diana Salazar, and Trinidad's Minister of Foreign Affairs and Communications, Dr Surujrattan Rambachan.

The Trinidadian leader's visit is being projected as part of a strategy to position Port-of-Spain as a gateway to South and Central America, which offer combined markets of 600 million people.