'Ghett'A Life' to be released in Barbados 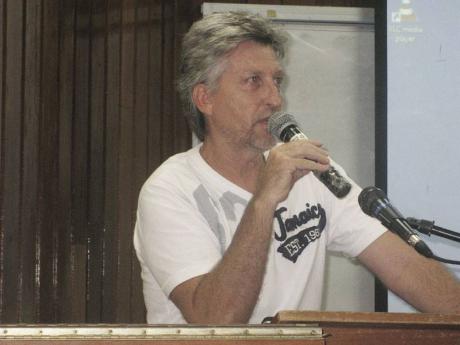 Chris Browne speaks to an audience at the University of the West Indies last Friday. - Photo by Mel Cooke

Scriptwriter and film director Chris Browne went back to his earlier days behind the lens with the shorts, Entry Denied and Crossfire, and updated the audience on the progress of his 2011 release, Ghett'A Life, last Friday evening.

The Gleaner Honour Award recipient was the week's guest in the Department of Literatures in English and Institute of Caribbean Studies, University of the West Indies, Mona's Movie Month series, which runs on Fridays throughout March. It is held at the Neville Hall Lecture Theatre.

He said Ghett'A Life, the film about a young boxer who crosses political lines in pursuit of excellence in the ring, will be released in Barbados on March 21.

However, as Browne spoke about his experience of being a filmmaker in Jamaica, a consistent thread was not just how much easier it has become to make films, but also that making the film is actually the easiest part.

Negotiating its widespread release is the tricky part.

"I want to talk about being a filmmaker in Jamaica," Browne said, after the Ghett'a Life trailer was shown another time around for the latecomers. He asked, rhetorically, if there is scope beyond the obvious - commercials and music videos. He zeroed in on the technological changes, noting that in the early 1980s the only medium available to shoot on was film.

The popular RED camera, which allows for film-like quality recording in digital format, was put in the context of global economic disparities.

"I thought, 'Someone is making a camera for filmmakers in the Third World'," Browne said.

And, with the digital developments where there are laptops and editing software easily available, budding filmmakers have no excuse to not get their work going.

Still, there has to be some tenacity.

"A lot of people go through the system, but not many people stick with it. You have to stick with it and find your voice," Browne said.

Having a suitable format to record is one of the reasons Browne's output has not been as prolific as it could have been.

"I always look for the best medium to put my work on. I have spent so much time and energy making it, I might as well put it on the best medium I can find," Browne said. "That is one of the reasons I have not made that many films, because of cost."

Ghett'A Life was a notable exception, Browne saying this was the first film for which he had raised money. But even with financing, Browne said, "I thought making the film is the hardest part. Raising the money is the hardest thing, then selling it is probably harder. And when you are making a film, you can't think of anything harder. I was lucky to find a way to source the money. Now we are going through the process of selling it."

"And that is a whole new learning curve," Browne, who did not have a Facebook page until he made Ghett'A Life, said.

He paid substantial attention to the lack of a formal film structure in Jamaica, as opposed to Hollywood where there is a machinery with people doing various jobs. Still, Jamaica is a good source for stories.

"When I travel and tell people about Jamaica, they are interested. So why would they not be interested in the stories we tell visually? We have an audience," Browne said.

Then, when one film is done, it is on to the next, where the process starts all over again.

"I am not making bun, where every shop is going to take it," Browne said.

Making films came at a turning point in writing scripts.

"I used to write scripts. I said I was not going to write another one until I made a film from one of them," Browne said. He did not set out to be a film director and questioned if he is one in the accepted sense of the term, as "a director is someone who can pick up any script and direct it". For him, though, "it is personal".

Browne was asked why so many of his films have inner-city settings, Ghett'A Life having that in common with Third World Cop and Dancehall Queen. It came down mainly to a matter of money, as Browne said, "because it is cheaper". To do a film outside of Kingston would require housing a number of people over time. Plus, Browne said, "There are interesting stories in the inner city."

Then there are films set in a different time from the present, Browne saying there are difficulties doing period pieces.

"That's why I lift my hat off to Storm [Saulter] for making a film about the '70s," he said, referring to Better Mus' Come. "I would never touch that."

"I can deal with now. I don't have to dress people. They are already dressed."

"As film evolves in Jamaica, you will see the middle-class films you want to see and the uptown films," Browne reassured those who questioned the inner-city focus.