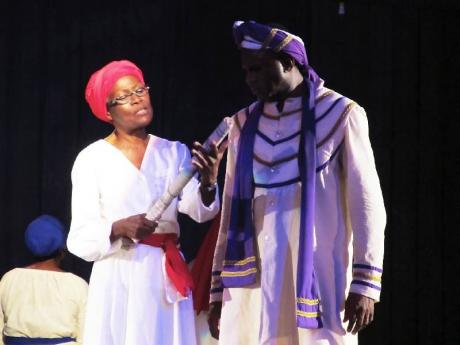 Mrs Bedward (Barbara McCalla) reads the latest news on her husband to him. 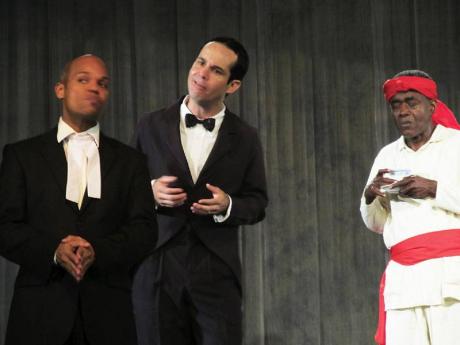 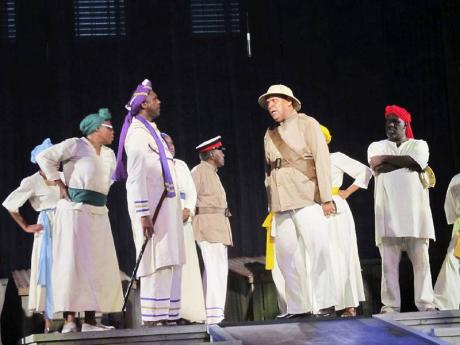 The police and Bedward confront each other at Union Camp. Photos by Marcia Rowe 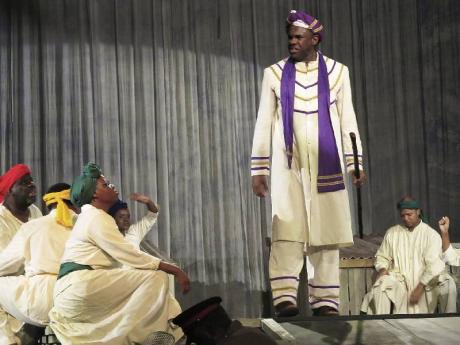 In a scene from 'Bedward' being played at the Karl Hendrickson Auditorium, Alexander Bedward (Alwyn Scott) addresses his flock at Union Camp.
1
2
3
4

For a large number of Jamaicans, the name Alexander Bedward is unheard of.

Only some, from a particular generation, will recall the many tales of the legendary religious figure.

In remounting the epic drama surrounding his life, producer and playwright Louis Marriott and his talented cast and crew, headed by director Yvonne Brewster, have made an attempt to spread that knowledge to other generations.

Perhaps this would have been achieved if you took note of the rich gospel music, the seemingly authentic costumes and the well-written script. There was also some fine acting and good directorial decisions, which could have helped to generate interest from the MTV generation. But alas, the set would not have helped the situation.

Hanging microphones amplifying the voices of the actors, the epic poetry begins with a service that turns out to be more than a regular one. At this service, Shakespeare Woods (Teddy Price) hands over his title and position of Bishop of the Free Native Baptist Church to Bedward (Alwyn Scott).

But Bedward's ascension to the top was only welcome by some members of the church. Others such as Mrs Bedward (Barbara McCalla) were not supportive of the bishop's decision. These challenges, along with eccentric behaviour, like staring in the sun to "see who will blink first" and his many visions made him a pariah to the media of the day and the police force.

As the story progresses, Bedward, while building on a ministry that extended to Cuba and North America, became an obsession for a reporter (Jean-Paul Menou) and the police. His every move was recorded and dissected, much to his chagrin. And when he and the members of about 300 decided to march into Kingston in protest of the treatment meted to them, the police, headed by an inspector (Michael Forrest) and a sergeant major (Price) arrested them.

The story ends with Bedward taken to court, tried and sentenced.

Marriot's script, while providing humour, showed not only a Christian, but also the determination of a man whose mission was to establish a church that reflects his race and their culture.

Though Bedward's comments constitute a devastating satire, he never loses his enthusiasm for his cause. And so when the play ends with his arrest it seemed to amount to a pause in his struggle. And it is a commendable ending by Marriott.

The play was staged at the Karl Hendrickson Auditorium, on the grounds of Jamaica College. The significance of the venue is its seven-minute approximation drive from August Town, where Bedward lived and preached. Perhaps even walking on the very place where aspects of his life unfolded on Sunday.

But while the space itself created a historic connection and provided openness for a dramatic piece of that magnitude, the Ron Steger-designed set seemed no match for the dynamic settings of Marriott's story.

Most of the action in the story unfolds in the Union Camp, but it also shifts to the Hope River and Kings House. But there was no scene change, though that may have been a good choice for the genre. However, the absence of visual or easily identifiable objects to establish each setting, such as the Hope River, would have helped.

Constructed as a thrust stage, with the audience able to sit on the three sides, meant that the much-promoted revolving stage was effective but did not generate the 'wow' factor needed in a 21st century theatre. Nor did it help to establish setting.

Likewise, Brewster's directorial decision seemed to be influenced by Erwin Piscator's form of Epic Theatre. It showed brilliance but may prove too intellectual for the average theatre Jane and Joe. An example could be seen in her use of a River Mumma (Renee Rattray) to represent the Hope River. But such creativity may easily be overlooked.

Her choice of the church banner to symbolise the road to Kingston and as the partition in the trial scene was very clear.

Without doubt, the strength of the production came from the sometimes lively rendition of the various Negro Spirituals, as well as their placement and use in the play.

Each was given its right timbre, nicely controlled and beautifully delivered. The musical director Noel Dexter, the main vocalists Winston 'Bello' Bell (Roman Henry), Grace McDonald (Sarah Plunkett) and Rattray must be credited for such rich sounds.

Collectively, the cast gave creditable performances. And while the growth in their characters was restrained they did well in showing the changes. Special mention must be given to Bell, Trevor Fearon and Scott, who were exceptional.

McCalla and Scott, too, were impressive. Menou played the most number of roles, Governor, Reporter and Government Chemist, and he did a fine job.

The production of Bedward is well worth seeing, not only for its entertainment value, but also for the opportunity that it offers to begin a dialogue on the life and work of the man. Was he just another angry black man as portrayed, or was he justified in his beliefs? You go and be the judge.