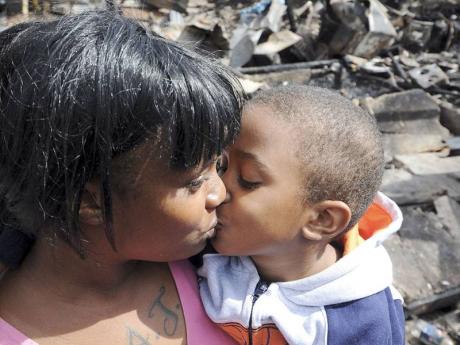 Keisha Bowen gets a kiss from her son, six-year-old Adrian Dwyer, who saved her life by waking her as a fire raged at 33 Tower Street in Kingston that left several people homeless on Monday afternoon. - Ricardo Makyn/Staff Photographer 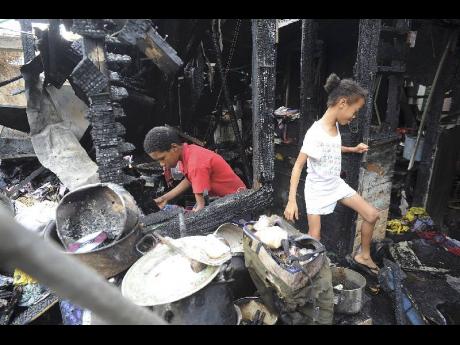 Newland Bogue (left) and his niece Amelia McDuffus see what they can find in the rubble after the fire. 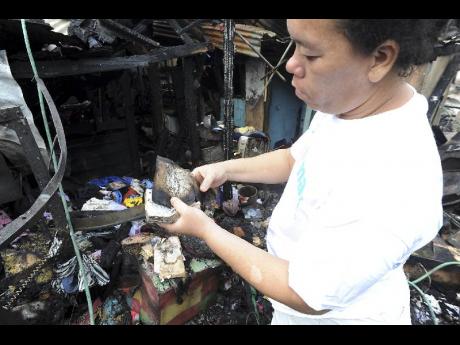 Antiapie Bogue examines the remains of her Bible as she searches in the rubble at what is left of her home. 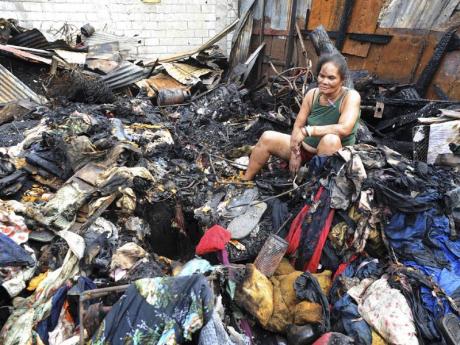 Ann-Marie Lee-King sits among what remains of the house where she, her children, grandchildren and great-grandchild lived at 33 Tower Street. - photos by Ricardo Makyn/Staff Photographer
1
2
3
4

Keisha Bowen clutched her son Adrian Dwyer yesterday as she and other residents reflected on the massive fire that left 25 people homeless on Tower Street in Kingston a day earlier.

So intense was the blaze that smoke was still coming from what remained of the two dwellings that were razed. Bowen and Suzette Morgan, who along with their respective families shared one dwelling, emerged from a group of persons sitting across the street from where the inferno took place to relate their story. Bowen said it was six-year-old Adrian who saved her.

"I was sleeping and is AJ (her pet name for him) wake me up. Him say, 'Mommy, Mommy, we a go dead?'" she recalled. He not only roused her, but he also carried out his younger sibling as flames engulfed the house.

Yesterday, as warders from the nearby Tower Street Adult Correctional Facility and social workers came by to offer support and collect information, the women lamented that they have been able to save virtually none of their material possessions.

"Watch mi curtain," Bowen said ruefully, kicking at what was left of it. "Not even mi pot dem mi can see."

Bowen, who lives with her three children and a nephew, thanked the residents of the community though, not only for lending a few clothing items, but for their general assistance. They were all surprised at how quickly the blaze spread.

"By the time the fire start, like 40 minutes after, everyting gone," said Bowen.

Morgan, who had stepped out to purchase goods at a nearby shop when the blaze started, said she couldn't believe what she saw.

"Yuh see by the time mi reach roun' a di back, an open di door, jus' fire," said Morgan. "I neva even have a bucket a water fi throw pon di bed so mi coulda draw it out."

Next door, Ann-Marie Lee-King, the matriarch of that household, was a disconsolate figure, sifting through the rubble. She was looking for anything that resembled her home. Pieces of clothing, the remnants of appliances and the barely recognisable shell of what was a two-storey dwelling all lay beneath her feet.

"I had two sewing machines that got burned up. I used to sew things like pot holders and sell to make a little money," said Lee-King's niece, Antiapie Bogue, one of the 14 people who called that dwelling home.

"Everything burn up. Mi fridge, mi stove, everything; and is security work mi used to do to be able to buy them," she reflected.

She said that, during the fire, her biggest concern was looking for her nine-month-old nephew Alex Pennant. Mercifully, he had already been rescued.

They may be able to find shelter, at least in the short term, but right now the focus is on their children, nieces and nephews who cannot go to school. One of Bowen's daughters did have a uniform left, which she washed Monday evening, ironed and wore yesterday.

"She said she couldn't miss school," her mother marvelled. But the other children, at various levels of the school system, were not that fortunate.

"My niece goes to Alpha and all of her SBAs (school-based assessments) burn up," said Bogue. But all three families were grateful for the one thing the fire did not take, their lives.

"Mi tell my daughter say, better mus' come," said Morgan, looking up at the slightly overcast sky as showers which might have helped them on Tuesday threatened to come down.