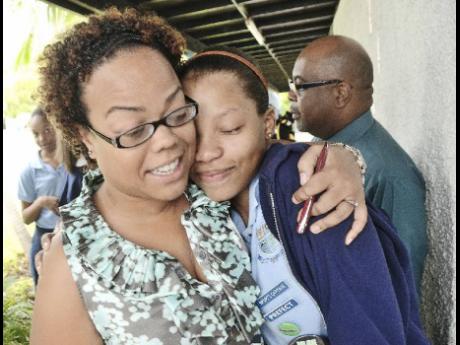 Dr Tamika Haynes, clinical psychologist, comforts Kimberly Goodall while Principal Alfredo Bennett looks on at the launch of a public-service announcement on child abuse at Hillel Academy in St Andrew yesterday. The launch had led Goodall to reflect on a friend who had died as a result of child abuse. - Rudolph Brown/Photographer

Touched by the worrying trend of child abuse in society, Inscape Foundation, a non-profit organisation, is now dedicating its time to saving children from such cruelty.

The group launched a public-service announcement (PSA) yesterday at Hillel Academy in St Andrew to sensitise members of the public about why they should speak out against abuse.

Dr Tamika Haynes, addressing the launch, said it was time for society to tackle the problem in order to control the increasing number of reported cases of child abuse.

She said the group has designed the PSA to sensitise members of the public and to get them involved in putting an end to child abuse.

"The PSA demonstrates that abuse is wrong, whether it be physically, emotionally or sexually. Children have rights and there are avenues that people can go to if they feel that a child is being abused," she added.

Carolyn Gomes, executive director of Jamaicans For Justice, lauded the initiative by Inscape saying that child abuse was a silent killer which needed to be addressed.

"(Child abuse) kills children's innocence, their hope, their dreams, and too often is an abuse suffered in silence. And so, hopefully, this PSA will help children, parents, those who know about abuse, to take the time to understand the destruction that it does and find the courage to report it, to bring it to an end," she added.

Gomes said JFJ supports the call for persons to speak out about child abuse which has been outlined in the PSA, and it was also looking to get a programme out that would be based on children's rights.

In the meantime, Timothy Skyers, head boy at Hillel, called for more persons to get on-board to assist.

Skyers said that as a student he would be redoubling his efforts to fight for the rights of the vulnerable in society.

"A lot more can be done by society, and we need to look into ourselves to find the power to fight against this child abuse, which is important to save the children," he argued.