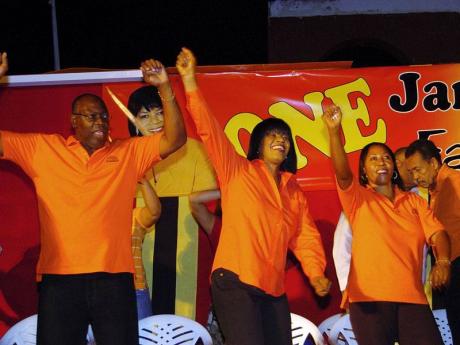 ROSEMARIE SHAW has returned to the fold of the Jamaica Labour Party (JLP) and is promising to take home her old stomping ground - the Morant Bay division - for the party in the March 26 local government elections.

Shaw, who contested the September 2007 general election for the People's National Party (PNP), said her return to the political field was requested by the people in the division.

"The people from Morant Bay division petitioned me. Over 2,000 of them asked me to come and represent them, and I am looking forward to going back to the parish council to offer such representation," Shaw told The Gleaner.

A former mayor of Morant Bay, Shaw faces Rohan Bryan of the PNP.

With the latest political move, Shaw joins the list of political flip-floppers. She had unsuccessfully challenged James Robertson for the Western St Thomas seat in the 2007 general election. By 2008, following Portia Simpson Miller's victory over Dr Peter Phillips in the PNP's presidential election, she left the party.

When Shaw did not contest the December 2007 local government elections, it was the first time in 26 years that she was absent from the St Thomas Parish Council.

Her replacement, Bobby Sephestine, won the division for the PNP by 61 votes. Shaw said it was her help that brought him home.

But now she has had a change of heart, arguing that the people in the division have been neglected by their elected representatives.

"I feel that the member of parliament that I have worked with for over 10 years was really not the right person and it was a mistake. He is a disaster," Shaw said of Dr Fenton Ferguson.

"He called me back to run the division. He had a breakfast meeting with me and I told him in no uncertain terms that I am not interested," she added.

Shaw said areas in the division such as the Brown's Gully and the Bamboo River are in need of urgent attention.

"Not even the trucking of water to certain areas ... the people are suffering. It is appropriate now and very timely for me to go so the people can have a voice once again," she told The Gleaner.

St Thomas is shaping up to be one of the battleground parishes in the elections. In the 2007 local government elections, the JLP won eight of the 10 divisions but, coming out of the general election, the divisions were shared five apiece.

Morant Bay was one of the divisions won by the PNP. There, Ferguson polled 2,724 votes to Dr Patrece Charles-Freeman's 2,562 votes. Shaw claims that police, military and election-day workers' ballots were deposited in boxes in the division, which skewed the results. She said, based on her calculation, the division was won by 12 votes.

Shaw said it was foolhardy for anyone to attempt to use the general-election result to predict how the people would vote in the local government polls. She argued that people would cross political lines to vote for the candidate who will offer better representation.

Confident of victory, Shaw is preparing to head back to the council, but she is not eyeing the big chair.

"I don't want to be mayor two times. All I am thinking about is being councillor to represent the people," Shaw said.