JC to compete in robotics competition 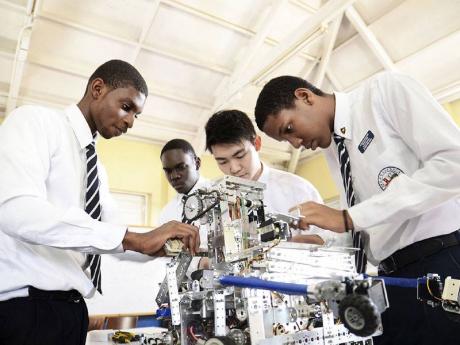 JAMAICA COLLEGE (JC) will be carrying the hopes of the nation and the region when they participate in the FIRST Tech Challenge (FTC) robotics competition.

The 10-member team leave for Manhattan, New York, today. The competition is run by US FIRST, an organisation trying to use technology, mathematics, engineering and science to "solve real world problems", according to Georgia Rudolph, one of the teachers managing the team.

This is JC's third time entering. In 2010, they finished second to last, but improved greatly in 2011, finishing 12th out of 65 teams. This year, they are gunning for top spot.

JC has had a robotics club since 2009 and president of the club, Gavin Samuels, explained that being able to put a machine together and applying the lessons learned in subjects like science and mathematics is very rewarding.

"It's more fun. You get to see an end product. When you're programming (in class) it's just there on a screen. But here, you can see it in action. And you feel proud." US FIRST sends basic parts that every team must use and the team has been careful to follow all the specifications laid down by the organisation.

"They have a very comprehensive list of things we can and can't use. For instance, we can't use cardboard, no welding of parts together and elastic bands of a certain width." All these intricacies can make one team's robot lift or carry more than another, thus giving an unfair advantage. Team members explained how the prototype for their robot was first designed using Lego bricks. Now it's an organised bunch of nuts and bolts. The robot is named Griffin for the mythical beast on the school's insignia, and is connected via Wi-Fi. It is controlled using regular game system joysticks.

This competition will see the different teams creating robots that are programmed to collect balls around a playing area, transfer them to a box that the robot must then hoist into the air. Each team has two minutes per match. Teams are marked for programming (the 30-second period that starts from turning on the machine), the number of balls they can pick up in the next minute and a half.

They are also graded on how high their box can be lifted. For each round, the JC team will be paired with another team and the combined scores decide how you move on. So even though they are paired, they are still competing with their 'partner' because they are seeking a better score than them and you get a different partner next time.

"We use fish line to control the hoisting mechanism and the fibreglass for the area where the box is located," Rudolph explained. The glass also serves as a design board for decorating the robot.

Rudolph explained that there is no cash prize per se, but there are over US$14 million in scholarships available.

JC has been able to put Griffin together even with some challenges.

"We got our equipment a bit late, again," said Rudolph. "Some teams got their stuff from September. We only got started in January."

The competition will be held on Saturday at Jacob Javits Convention Centre with a junior competition, the First Lego League, the following day. Junior members of the club are going to gain some experience in that arena, hoping to compete next year.