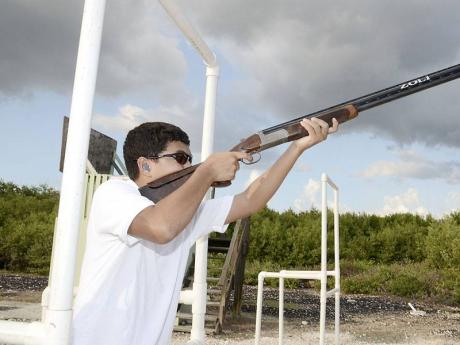 Nicholas Chen takes down another target. - photos by Gladstone Taylor/Photographer 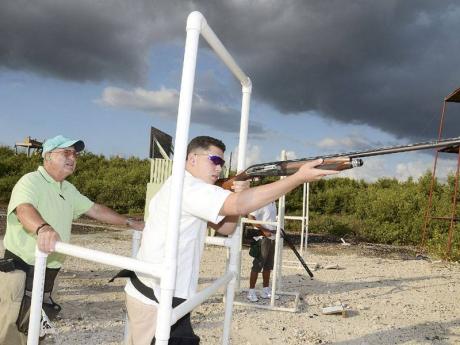 THINK OF an after-school extracurricular activity for children and a plethora of sports and clubs come to mind, but clay shooting, quite possibly, is not one of them.

But Khaleel Azan, coach of the National Skeet Club, is trying to change that. The veteran shooter and instructor has a programme that he runs at the Jamaica Skeet Club in Portmore, St Catherine. Azan is certified by the National Skeet Shooting Association and the National Sporting Clay Association, and has been informally helping out young and new shooters at the club for years, but in 2010 he took it to another level.

"I spoke with Nicola Melhado at the American International School in Kingston and she suggested I start a class," he explained. By June last year, he trained enough juniors for the first Junior Sporting Clays Nationals at the club, the major sponsor being the National Commercial Bank's Capital Markets division.

Azan has been able to have clay shooting sanctioned in many high schools. He has about 40 youngsters and personally picks them up and carries them home after. Azan invited The Gleaner news team to the club one afternoon to see some of his pupils in action.

Shooters' ranks start at E (lowest), to D, then C and so on in ascending order. The highest class is master. Two of his three students are Nicholas Chen and Brandon Reid. Both recently participated in the Seminole Cup in Florida, the biggest annual shoot in the state. More than 500 competitors entered and both boys shot in the D class, (because that's where they put you when they don't know your skill level).

By the time they left, people knew their skill level was much higher. In the main event, Chen won his class and Reid placed fifth. They were also perennially in the top five in the preliminary shoots. Azan's other student shooting the day we observed, Zachary Harris, is also doing very well. He just started shooting last year and has already moved from E to C. Another Jamaican, Joey Chin, shot a 161 in the master class.

So it's off to the five-stand area (where five shooters would line up, each to his or her own station). But before we start, a few essentials. Glasses? check! rounds? check! pouch? gotcha! Marker to dot the shooter's eye? huh? Azan explained that everyone has a dominant eye and, so, dependent on whether you shoot left or right handed, he may have to mark out a spot on the lens covering your 'weaker' eye to get you totally concentrating on your dominant eye i.e. better vision to hit your target. Oh, and of course, don't forget the earplugs. Can't have the cochlea bursting from all the gunfire at close range. Today, the boys are shooting at targets being thrown from six traps. The targets are called 'birds'. A real teacher, the anecdotes spit faster than the pull of a trigger.

"Ask them to call the bird so you can see the flight of it. Check the flight and the landing," he said. Obediently, the trio do, getting a better idea of the flight path of the circular prey and how the wind's affecting them. Soon they start firing away, Chen and Reid sharing a rifle, Harris a lone gunner.

"You want to intercept them right there," Azan makes an intersection with his index fingers. It (the target) is like a monkey and you're cutting off his track," he explained. He stands behind the shooters, slightly hunched, a reassuring hand on their shoulders. A few misses here and there, shells flying all over, Azan's voice is calm.

"You have to get out in front of it. Just move with the bird. If you can get the gun to move the same speed as the bird, you've got it," he reasoned. Pretty soon, his students show the teaching is not going in one ear and out the next.

The next big tournament is the NCB Capital Markets Limited Sporting Clays Open. The entity is the main sponsor of the shooting programme and full sponsor of the junior event. Our shooting is a little behind the world Azan pointed out, citing the older traps that we use.

"Plus, those guys can have a tournament every week. We only have one a month," he said. His next aim is to affiliate with the Scholastic Clay Target Program in the USA.

"This is the junior programme in the US and they have representatives in every state. The students can get sponsorships, and scholarships and we're trying to get that at our club."

But that doesn't mean we haven't had any success. Other than Chen and Reid's exploits at Seminole, Chad Ziadie shot a record breaking 97 out of a 100 at the aforementioned national junior tournament.

A bit of a dreamer, Azan is looking for world champions in every discipline, at all the competitions from Commonwealth Games to Olympics. He is also trying to arrange forums with NCB where the children can learn about banking and planning for later in life. He also thinks developing the sport would benefit Jamaica as another form of tourism.

"It has the potential to bring tourists just like in Florida where the people come down from the colder states to shoot. We could have them coming here. So there is good tourism potential and we're looking at all those aspects."