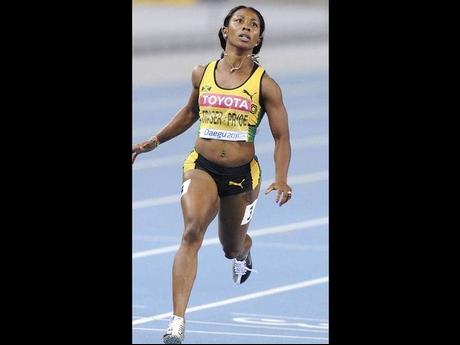 Shelly-Ann Fraser-Pryce will have additional motivation to give her all in defending her 100 metres title when this summer's Olympics Games come around, as she seeks to give the people of Jamaica and those in the diaspora a gift to mark the county's 50th year of Independence.

"A 50th anniversary present is definitely something that we could give this nation, so that all the Jamaicans in London, here in Jamaica and everywhere in the world can actually feel proud about what we have accomplished," Fraser-Pryce shared with The Gleaner, following a press conference held to announce her contract renewal with Grace Foods and Services at the company's head office yesterday morning.

"I love my country and I love representing Jamaica, and I think we have some wonderful persons here, so making Jamaica proud is what we do," she added.

Fraser-Pryce paid tribute to compatriot Veronica Campbell-Brown, who over the weekend successfully defended her 60-metre title at the World Indoor Championships in Istanbul, Turkey, with a world-leading time of 7.01 seconds.

"I must say congratulations to Veronica, she did really good and I think she went out and represented Jamaica well," she expressed, while revealing that she would love to experience running indoors as she has never done so before.

The University of Technology student, who has two months left to complete her degree in Childhood and Adolescent Development, will do battle with the likes of Campbell-Brown, Kerron Stewart and Sherone Simpson to qualify to represent the country at the Olympics in the 100m, and possibly the 200m, when the national trials are held in June.

"National Championships is going to be an Olympics within itself, so I am looking forward to it and I just pray to God that I continue to have good health, work hard and stay focused and grounded as always," Fraser-Pryce expressed.

The 25-year-old, who had a disappointing 2011 season due mainly to injuries, has declared herself injury free.

"Training has been going good so far, I can't complain," Fraser-Pryce stated. "As an athlete you have good days and you have bad days because we are all human, but I try to make the best of the training sessions and don't leave any stones unturned as I try to get it right," she added.

Fraser-Pryce is set for action this Saturday at the University of the West Indies Classics, to be staged at the UWI/Usain Bolt track. Though not yet privy to the event she will be running, she is hoping to stay clear of the 400 metres.

"I hope it is not the 400 (metres) because I have done two so far and it has been challenging."