Shelly-Ann stays on track with Grace 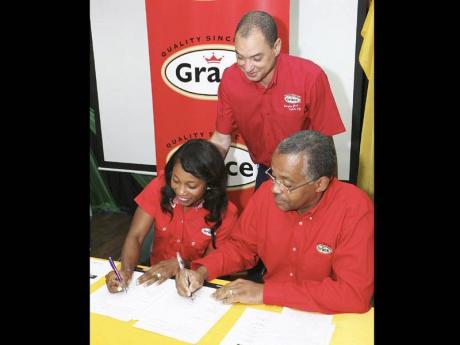 As a testimony of faith in Olympic 100m champion Shelly-Ann Fraser-Pryce, Grace Foods and Services yesterday renewed its strategic partnership with the 25-year-old, which will see her continue to represent the company as a brand ambassador.

This is the third renewal of the contract, which was first initiated in 2008, but unlike the previous two which spanned one-year periods, the latest is for two years.

As Grace Foods ambassador, Fraser-Pryce has been involved in telling the brand's story to audiences across Jamaica. She will play a lead role in the Grace Foods Sports Nutrition Boot Camp series - a nutrition-education programme that is part of its sponsorship agreement with Jamaica Athletics Administrative Association (JAAA). In addition to this, she will also serve as the spokesperson for the Grace Foods initiative to donate 10 cents of the sale of some of its most popular products to the JAAA.

"I am excited to be part of an organisation that cares so much about me, and Grace Kennedy has been with me since 2008 and they continue to show interest in my development and what I do on the track and off the track, and I am excited to be part of the family again," Fraser-Pryce expressed, while speaking at a press conference held to announce the contract renewal at Grace Kennedy's head office yesterday.

"I know that the rewards that we will reap together at the end of 2012 will be nerve-racking," she added.

"She has been a wonderful, wonderful ambassador for us in terms of building our brand," GraceKennedy's CEO Don Wehby disclosed.

"Shelly-Ann (Fraser-Pryce) is the kind of everyday hero we need and in many ways she is personification of the values that are important to Grace Foods. We are delighted to continue our partnership," he added.