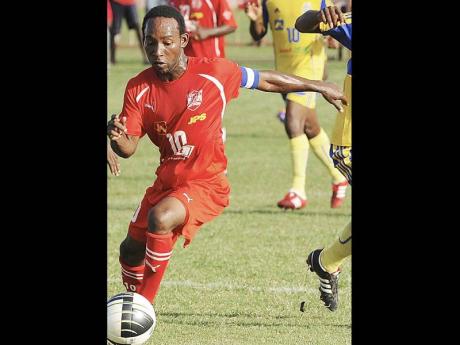 Boys' Town captain, forward Michael Campbell, said he was more than happy with his hat-trick that helped his team secure a 4-2 win over Portmore United in their top-of-the-table Red Stripe Premier League clash at Ferdie Neita Park on Monday night.

Campbell, who was a constant thorn in the side of Portmore's defence throughout the encounter, scored in the 14th, 68th and 89th minutes, with midfielder Renae Lloyd netting the other in the 86th.

Portmore's brace was netted by fullback Rosario Harriott in the 76th and 82nd minutes.

"It feels good, really good to know that I was able to get a hat-trick as it has been a long, long time that I have been able to achieve this feat," said Campbell.

"It also feels good to know that as a result of the hat-trick we were able to win as we could not allow Portmore to get the win, and slip too far away from us."

Waterhouse, with 45 points, defending champions Tivoli Gardens on 44 and Humble Lion, 43, round off the top five, while lurking inside the top six are Harbour View on 39.

They are followed by Montego Bay United and Sporting Central Academy (38 points each), Arnett Gardens (36) and Highgate (26), while down in the relegation zone are Reno (25) and Village (22).