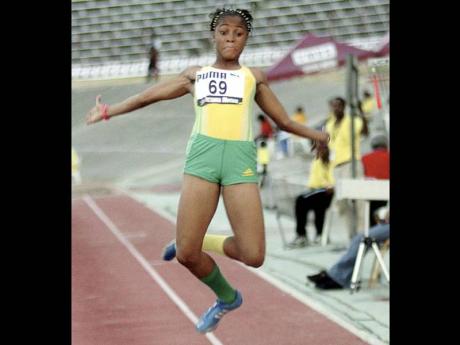 Grant on her way to winning the Class Two long jump at Champs in March 2006. - File

Despite competing with a high fever, Grant, a former long jump champion at Boys and Girls' Championships and senior at New Mexico Heights University, captured the female long jump with a record 6.26 metres, then returned to take the 200 metres in 24.08 seconds.

Grant won the Outdoor long jump title last June and is being conditioned by her former high-school coach, Patrick Johnson, an assistant coach at her University. She was very pleased with her performance, especially in the long jump, and is aiming to make Jamaica's team to the London Olympics this summer.

"My aim is to jump 6.7 or 6.8 metres this season as I want to make it to the Olympics for Jamaica," Grant was quoted on NCAA.Com.

In the same website report, Johnson said his athlete is capable of much better.

"She broke the record, but I think she is much better than what she achieved at the Championships as she has unbelievable talent," said Johnson, a former national junior and senior coach.

Former St Jago High quarter-miler, Yanique Haye, along with former Holmwood Technical athlete Tamara Keane, also had top-three finishes. Competing for Lincoln University, Haye clocked 44.47 for second in the 400m, while Keane was third in 55.61 seconds. Both athletes also helped their team to win the female 4x400m in 3:44.74.

Among the men, four Jamaicans finished among the top three. Former Holmwood athlete Romel Lewis also a past World Youth representative for Jamaica who now competes for Lincoln University, was second in the 60m sprint in 6.67 and third in the 200m in 21.60. Ravel Gray, formerly of Montego Bay, was third in the 60 min 6.73 seconds.