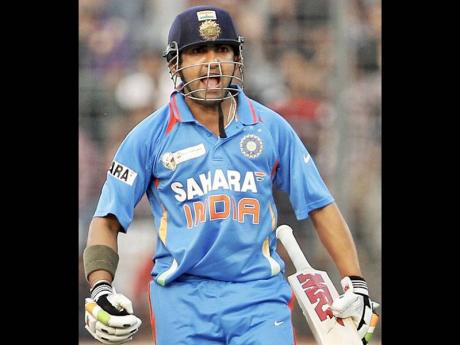 Chasing a winning target of 305, Sri Lanka were dismissed on 254 in the 46th over. Mahela Jayawardene scored 78 and Kumar Sangakkara collected 65. Lahiru Thirimanne was next highest with 29 as none of the other Sri Lanka batsmen could cross 20.

India picked their strongest available team and built a rock-solid base as Gautam Gambhir and Virat Kohli scored centuries in a 205-run stand to propel the World Cup winners to 304-3.

Gambhir made 100 from 118 balls with seven boundaries and Kohli hit 108 from 120 deliveries with seven fours at Mirpur Sher-e-Bangla National Stadium after Sri Lanka won the toss and opted to field first.

Captain Mahendra Singh Dhoni smashed 46 not out from 26 balls with six boundaries and a six in an unbroken 78-run stand from 7.1 overs with Suresh Raina, 30 from 17 deliveries.

Opener Sachin Tendulker fell for six with the total on 19, hitting a full toss off Suresh Lakmal to Jayawardene at short extra cover. Tendulker is still to score his 100th hundred in Test and limited-overs international cricket.

On Sunday, Pakistan beat Bangladesh by 21 runs in the opening match.

India have won the competition on five occasions, while Sri Lanka are four-time champions. Both teams recently featured in the limited-overs tri-series in Australia, in which Sri Lanka lost the finals 2-1 to Australia.

The third match of the Asia Cup is between Pakistan and Sri Lanka tomorrow, also in Dhaka.