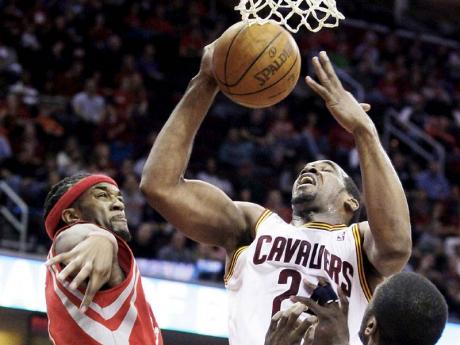 Houston Rockets' Jordan Hill (left) tries to knock the ball loose from Cleveland Cavaliers' Samardo Samuels of Jamaica in the second quarter in an NBA basketball game on Sunday in Cleveland. The Cavs won 118-107. - AP

Kevin Love got comfortable Monday night and then he got in a groove at the right time.

Love scored 13 of his game-high 30 points in the fourth quarter and the Minnesota Timberwolves outlasted the Phoenix Suns 127-124.

"The biggest thing for me is I didn't get a good warm up," said Love, who set a franchise mark with his 15th 30-point game of the season. "I had good looks in the first half, but the ball never really felt right in my hand. I decided to get my legs under me in the second half and that was the biggest difference."

Love had been relatively quiet over the first three quarters, hitting only one 3-pointer and scoring 14 points through the game's first 34 minutes. But he hit a three to key a 7-0 Minnesota run late in the third then hit consecutive threes in the first minute of the fourth as the Timberwolves took a 98-92 lead.

Jared Dudley scored a season-high 28 points, Steve Nash had 25 and Channing Frye added 18 for the Suns, who snapped a three-game winning streak.

Derrick Rose scored 32 points as Chicago won for the 10th time in 11 games and handed New York their sixth straight loss. Rose shot 12 of 29 from the floor and had six rebounds and seven assists for the Bulls. Taj Gibson had 15 points and a team-high 13 boards for Chicago, which outrebounded New York 56-38. The Bulls entered the game leading the league in rebounding.

Carmelo Anthony led the Knicks with 21 points and Amare Stoudemire added 20, but the two combined for just seven points in the fourth quarter as the Bulls pulled away.

Jeremy Lin had 15 points and eight assists for New York, but shot just 4 of 11 from the floor and had little luck stopping Rose.

Paul Pierce scored 10 of his 25 points in the fourth quarter, Kevin Garnett added 21 points and eight rebounds and Boston made an impressive late rally to win for the second time in their last nine road games.

Blake Griffin had 24 points and nine rebounds for the Clippers, who have lost four of five while falling behind the Lakers atop the Pacific Division. Chris Paul had 14 points on 3-for-12 shooting in his second game wearing a clear protective mask over his broken nose.

Rodney Stuckey scored 29 points for the Pistons, who have not won in Salt Lake City since 2002 - losing their last nine visits here.

Tony Parker scored 31 points in his return from a one-game absence to lead San Antonio past Washington. Parker, who missed Friday's loss to the Los Angeles Clippers with a strained right quadriceps, hit 13 of 18 shots and had seven assists. Tiago Splitter scored 17 points, Tim Duncan added 14 and DeJuan Blair had 11 points and 12 rebounds.

Kemba Walker added 14 points, including 10 during a decisive 22-5 run the spanned from late in the third quarter to midway through the fourth. Biyombo finished with 12 points and four blocks for Charlotte, who snapped a three-game losing streak but still have the league's worst record at 6-34.