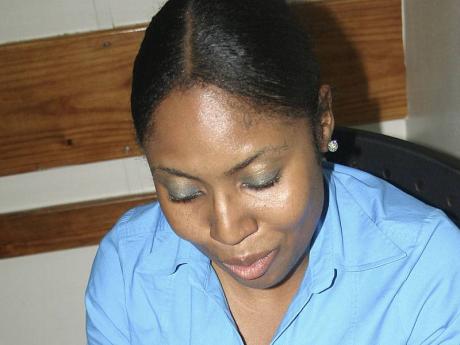 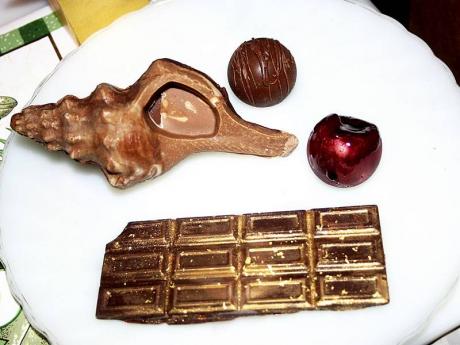 A chocolate lover's delight, these are just a few of the crazy creations from the mind of Chocodot's Shernette Sampson. The conch-shell shape offering is infused with white chocolate and nutmeg, while the bar flecked with edible 24-carat gold boggles the mind and the sorrel-infused is a hot favourite. Also on show is the banana rum cream-infused creation. - photo by Christopher Serju
1
2

When budding chocolatier Shernette Sampson promises crazy excitement, clients very often have no idea just how accurate that statement is. Her creativity is constrained only by imagination and the range of natural flavours.

"The different flavours we produce are our coconut curry chocolate, which is one of the most exotic. There are also flavours such as sorrel and we also do unusual things, for example, instead of a regular chocolate bar, we will do a spice/almond/pistachio or pumpkin seed with chilli peppers and sea salt in a bar," she shared with Food recently. "I constantly invent flavours," she admitted, the outcome influenced largely by local agricultural produce such as banana, honey, ginger and coconut among other foods.

Sampson, who has been honing her skills and testing the market over the last three years, recently launched officially her online company Chocodots to rave reviews, in partnership with Bailey's Rum Cream and the palate's delight. Patrons were treated to samples of her craziness including a tiramisu/Bailey's chocolate and, of course, the coconut curry which had them talking.

"People were impressed by the unusual flavours. It's not like something you can pick up in the store. These are unusual flavours you wouldn't think that somebody could put into chocolate. One of our favourites that people really go crazy over is the actual sorrel - infused chocolate, because when you bite into it, it explodes in your mouth."

Having done the requisite market research, Sampson is confident the time is right and discerning chocolate lovers will really bite into the high-end luxury offerings from Chocodots, which must be purchased online after which they are delivered by courier service. This allows her to save money that will be invested in a store. There is another practical reason for the decision; she does not use preservatives, so the shelf life is not as long, as she explains.

"I use, natural ingredients, I don't use a stabiliser so if a client comes to me, calls or emails an order, the chocolate is made fresh. It's not made and stored."

And even though the company now only operates in Kingston and St Andrew and its environs, all orders are filled within 24 hours and the company has the capacity to fill large orders for corporate events.

For the confessed food lover with a sweet tooth, the recent launch was a dream come true after years of experimentation. "It has not been an easy process," she told Food. "Everything comes with challenges, but I've enjoyed every step of the way."

She is optimistic that even in this challenging economic environment Jamaicans will get logged on to her innovative creations such as the conch shell-shaped bar infused with chocolate and nutmeg. She showed Food another conventional shaped bar which was flecked with edible 24-carat gold. There was the banana rum cream and sorrel-infused offerings which were enough to get any self-respecting chocoholic drooling.

Sampson is looking to ultimately take her creations beyond the shores of Jamaica and, to this end, every minute away from her full-time job as a geographic information systems analyst is spent dreaming up more tasty, crazy, chocolate delights.

To get an idea of just how zany her chocolate concoctions are, visit www.chocodotschocolate.com.