Boston gets spiced up 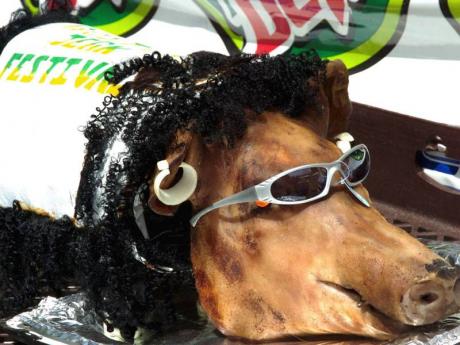 A decorated pig at a staging of the Boston Jerk Festival. - File

Having secured a ringing endorsement from newly elected Member of Parliament Dr Linvale Bloomfield, the coastal town of Boston, Portland, will see the return of its jerk festival on Sunday, April 8.

For residents, the news couldn't have come at a better time, with many saying they had given up hope of ever seeing the festival again staged in the popular east Portland community.

"Boston is the official home of jerk and there's no way this community should not have its own jerk festival," said Karen James, a resident of neighbouring Fairy Hill. "Anywhere you go in the world and you see people jerking they will always claim they are from Boston. It is great that Jamaicans will once again be given the opportunity to come and be treated to the finest jerk dishes in the world."

The Boston Jerk Festival began in 2000 and became an instant hit with patrons across Jamaica. However, in 2007, organisers, saying the festival had "outgrown" Boston, moved the event to the Folly Great House in Port Antonio. The event also changed names to become known as The Portland Jerk Festival.

Dr Bloomfield, however, noted that the Boston name was not only synonymous with jerk worldwide, but that a festival "at the home of jerk" was a fitting way for Portlanders to commemorate Jamaica's 50th anniversary celebrations.

"I am very pleased with this initiative and it has my full support," the MP explained.

Coordinator of the event, Stephen Williams, was quick to point out that the Boston festival has nothing to do with the annual Portland Jerk Festival which is held on the first Sunday in July, noting "it's very important that the distinction is made".

"Ours will be the Boston Jerk and Cultural Festival," Williams noted. "We will be assembling some of the finest jerk men in the world and patrons will again have the opportunity to taste the real Boston authentic jerk dishes. If you have never been to Boston then you have never truly tasted jerk."

The festival, he said, will be a day filled with entertainment and great food, including the traditional jerk pork and chicken, roast fish, breadfruit, festival and other delicacies.

Parking facilities, Williams added, will be at Fairy Hill, the Boston playing field, and also at neighbouring Castle.

"We will also have a two-way shuttle bus system for patrons coming in from the Port Antonio route and those coming from the St Thomas side. We have also moved to a bigger venue at the Boston Community Centre," he said.

There will also be a cultural village, a kiddies' village and other local acts. Admission is $800 for adults and $400 for children.

The venue is located just a stone's throw from the Boston Jerk Centre, and less than half an hour east of Port Antonio's town centre.

This year, patrons can expect a wide variety of foods, with the addition of conch, mutton, shrimp and lobster, all cooked in traditional authentic jerk sauce. Vegetarian meals will also be available.

Title sponsor for the event is Wisynco. There is a host of associate sponsors, including Tropical Vibes, Downsound Records, Petal's Variety, Bay View Villas, IRIE FM, and North Coast Times.