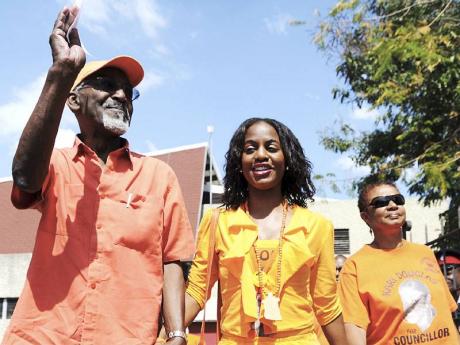 RETIRED POLITICIAN Easton Douglas has said his daughter has a great shot at winning the Trafalgar division for the People's National Party (PNP).

Kari Douglas, the 28 year-old daughter of Easton, is seeking to take the seat from the Jamaica Labour Party's (JLP) Waderoy Clarke.

Julian Robinson, the member ofparliament for South East St Andrew in whose constituency the division falls, attempted to win the council seat in 2007, but was beaten by Clarke.

Clarke polled 1,277 votes to Robinson's 1,265. But in the 2011 general elections, the PNP improved its standing in the division, with Robinson winning 432 more votes than the JLP's Dwight Nelson.

Easton Douglas, who served as MP for South East St Andrew from 1989 to 2002, is confident that his daughter will get the nod from the voters over Clarke.

Clarke has represented the division in the Kingston and St Andrew Corporation since 2003.

"The way that Kari has applied herself since she was selected as the councillor candidate is very remarkable. She has worked very hard, she has shown a lot of commitment, she has this empathy for people ... and I know that this is going to be reflected in a victory for her," said Douglas.

The senior Douglas, who recently matched strides with his daughter as she headed to the nomination centre at Campion College, also said he expects Kari to benefit from votes because of the work he did as member of parliament.

"When the name Easton Douglas is called in the Trafalgar division, and in the Vineyard Town division, there is a certain degree of improvement in the way that the people feel with respect to any candidate with whom he is associated," he commented.

"I say so very humbly, and I hope it will help on the 26th of March when the election is held," Douglas added.

Easton Douglas is of the view that Kari may have been influenced to enter politics because of the work he did.

"I did not encourage her and I did not discourage her. I tell her what to expect, because I have been there. I believe that if I had shielded her and discouraged her, it would have disappointed her to the extent that she might have thought that I deprived her of something," he said.

For her part, Kari said: "Growing up, I was always passionate about community service and particularly the development of Jamaica's inner-cities, and the more vulnerable and unattached youth."

She added: "Given my father's active involvement in the political landscape, and my knowledge of his contribution to community and national development, it became clear to me that my passion for service could best be fulfilled through representational politics."

She has expressed confidence that the work she has done in the division will result in a victory on election night.

Clarke, meanwhile, is not worried about the Douglas factor in Trafalgar.

"I don't think it plays any role at all, not in the middle class. It might solidify PNP votes, but it should not affect me," Clarke said.