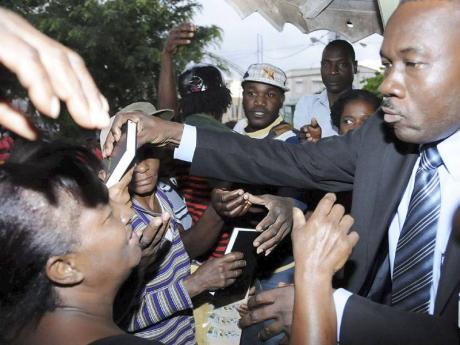 Pastor Michael Harvey (right), vice-president of spiritual affairs at NCU, had a challenge distributing the Bibles to anxious individuals. - CONTRIBUTED

MORE THAN 2,000 pieces of literature, including Bibles, were distributed in Mandeville during a community prayer and praise service to climax Northern Caribbean University's (NCU) Day of Prayer held recently. During the distribution, the demand for Bibles far exceeded its availability.

"The power of prayer manifested itself in a number of outcomes today," said NCU President Dr Trevor Gardner. "It is most gratifying to enter into a complete day of prayer and see both the campus family and the community of Mandeville mobilised. The strong demand for Bibles may be the single most satisfying experience for the day," said Gardner.

He added: "It reflects a need that exists within our community and our nation and affords the university an expanded opportunity in meeting such needs."

This was the second consecutive year that the faculty, staff and students of NCU joined thousands of their colleagues in Adventist schools and universities across the Inter-American Division territory in setting aside a day dedicated to prayer and Bible study.

"We believe we have a moral obligation to call back our community to find hope in God's word," said Pastor Michael Harvey, vice-president of spiritual affairs at NCU. "When everything else seems to be failing, we believe that the anchor is in God, and on his word - a sure foundation."

In delivering the main message in the open-air park in Mandeville, Manchester, Pastor James Daniel, field secretary of the Inter-American Division of Seventh-day Adventists, reminded the audience that praying Christians make a difference to a community.