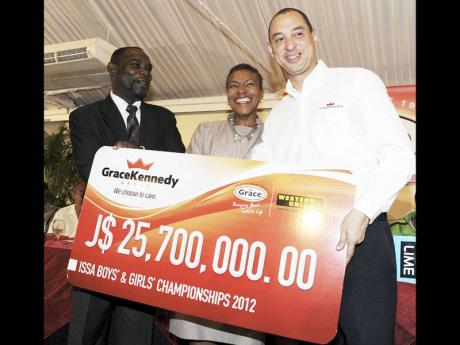 This contribution has has been boosted with another significant sponsorship, $7,000,000 from telecommunications firm LIME. A number of other companies also made donations to the premier high-school meet on the local track and field calendar.

GraceKennedy CEO Don Wehby made the contribution on behalf of his company to Champs chairperson, Colleen Montaque, and ISSA president, Dr Walton Small, during the launch at the Terra Nova hotel yesterday.

Wehby expressed elation that his company was celebrating its 90th year and Jamaica its 50th year of Independence, saying he was sure they would continue donating towards Champs for another 90 years.

"When it comes to Jamaicans there are three things you just don't mess with - our food, our family and our sports - and when it comes to sports there is nothing to us like the Olympics, which we wait for every four years, to watch our own athletes compete against and conquer the best in the world," said Wehby.

"Thankfully, however, there is one meet that we don't have to wait four years for, that ignites a frenzy and flurry of excitement in our island when it comes around, and that is the Boys and Girls' Athletics Championships," he added.

"These Boys and Girls' Championships, this is where Jamaica's talent for tomorrow makes its debut today. That is why GraceKennedy has been involved in the sponsorship of Champs for six years running, making an investment of US$3 million during that time," concluded Wehby.

Montaque thanked the sponsors and spoke about the upcoming meet, where 216 teams - 104 girls and 112 boys - will compete. Holmwood Technical and Jamaica College are the respective defending girls and boys champions.

"This historic event will hold even more significance this year as we celebrate 50 years as an independent nation," said Montaque. "We want to make this year's Boys and Girls' Championships one of the best yet and eagerly anticipate the support of track and field fans from across the region.

"The plans for this staging will surpass anything we have done before ... we are paying particular attention to the technical, security and entertainment as well as more convenient ticketing for patrons, specifically our grand ticket sale day on March 17th," she added.

ISSA President Small said: "We are very happy once again for the contributions from the various sponsors and we are hoping that this will continue for years to come.

"Aris has given us good advice over the years and it is very unfortunate that he will not be around to witness this Championships in a very special year, which is Jamaica 50th year as an Independence nation," he said.

Small also asked attendees to stand for a minute's silence in remembrance of Aris.

JAAA president, Dr Warren Blake, welcomed sponsors and mentioned that the meet is the largest in the world for these athletes, noting its competitiveness and the fact that it attracts foreign coaches, who recruit athletes on a yearly basis.

He said all vendors will be accredited and their wares will be searched vigorously as they do not want them to take anything illegal into the stadium. Taylor said all patrons will access the stadium from the main entrance, whether they are going to the bleachers or grandstand, and everyone is liable to be searched.