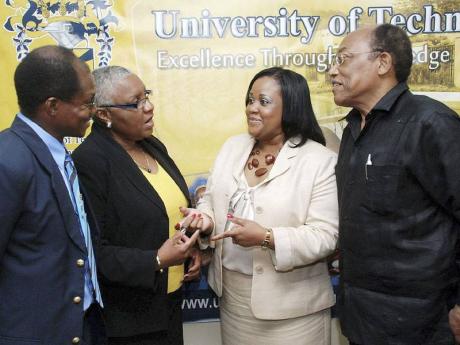 "The long-awaited day has arrived," chimed Jamaica Netball Association (JNA) President Marva Bernard, as she could hardly contain her joy in announcing that persons will finally be able to undertake the University of Technology (UTech)/JNA advanced level-one netball coaching certification course, as the first class will be held at UTech on Saturday, March 17.

The six-week course, which will cost persons $50,000 to enrol, consists of two modules: the basic coaching sciences for 30 hours, and technical preparation and rules of the game for another 30 hours.

In order for the 22 registered participants (to date) to receive certification, they must obtain a 50 per cent pass mark in each of the modules.

"I thought at one time it would never happen, but you have to have faith and patience," Bernard revealed at the course's press launch yesterday at UTech's Faculty of Sports and Science Conference Room. "It is a dream come true. It is something that we believe is important for the future development of netball."

She added: "The reality is that there are not enough certified coaches to meet the growing number of women and girls who play the sport. By the end of 2013, it is expected that some 240 coaches will be trained and qualified."

The coaching course has been in the pipeline since 2009, but was stalled due to a lack of sponsors to help interested persons offset the cost of the programme. The sponsors of the various leagues across the island have, however, stepped in to fund coaches from their respective leagues.

"The programmatic aspect has been ready for some time, but to get the students on board and to make the whole programme a reality, the sponsorship has been lacking," Professor Errol Morrison disclosed.

"This is the kind of way we need to go. I think we have learned from cricket that we need to put an understanding behind all this performance," he added.

All the league sponsors have, however, come on board to award scholarships to at least two coaches to do the programme. The Jamaica Public Service will be supporting eight coaches from the west, while Supreme Ventures Limited - which has two leagues - will sponsor four persons. Berger Paint will back two persons and East Central St Catherine MP Arnaldo Brown will be supporting three women. Jason Henzell from BREDS Foundation will be funding the coach from St Elizabeth, and Noranda Bauxite will support the coaches from St Ann.

"Not only is the offering of the course important to the game of netball, but the certification upon completion will be valuable to the participants in the courses," minister without portfolio in the Office of the Prime Minister with responsibility for sports, Natalie Neita-Headley, expressed.

"If Jamaica can import coaches from Brazil to coach the national football team, why can't we produce international standard coaches to coach netball in other countries?" she added.