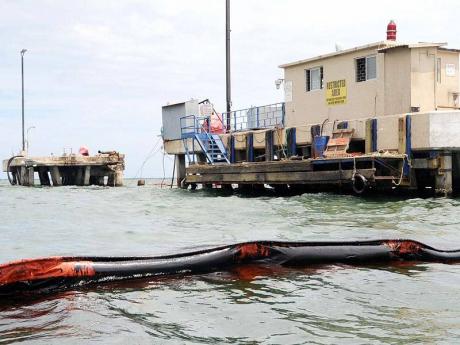 A settlement of US$12.6 million has been reached with insurers of the ship, M/T Great News, which crashed into Petrojam refinery's dock in Kingston in 2009.

The settlement amount, announced at Wednesday's post-Cabinet press briefing, is said to represent the full and final payment for repairs to the refinery's facility.

Information Minister Sandrea Falconer said, however, that the settlement agreed with the insurance company fell short of the value of the estimated cost of the damage to the dock.

Total cost of repairs to the dock is estimated at US$16 million (J$1.4 billion).

Falconer said the difference between the total cost and settlement amount - US$3.4 million - will be claimed through a lawsuit to be brought against the shipping company, Sea Ventures Shipping Limited.

The name of the insurance company was not disclosed at the Cabinet briefing.

The settlement includes a sum of US$1.45 million approved for Titan Maritime LLC for the clean-up of debris from the seafloor which resulted from the accident.

The contract also includes a contingency amount of US$250,000.

The incident resulted in damage to the main dock destroying various sections of concrete, mechanical and piping equipment.

All the manifolds and associated pipelines used for the transmission of oil from the dock to the refinery were destroyed.

M/T Great News at the time was was transporting crude oil to the Petrojam refinery, but no injury or spill was reportedly caused from the incident.

Since then, the dock has been undergoing continuous rehabilitation, racking up millions in cost.

Winston Watson, the refinery's general manager, was said to be travelling when the Financial Gleaner called for comment on the insurance settlement.

But already the state-owned refinery issued a J$99-million contract for emergency repairs awarded to Diving and Salvaging Limited, while the National Contracts Commission last year endorsed another for J$360.6 million for additional civil work, business interruption expenses and improvements to the dock.

The work on the dock, according to Petrojam, is divided into two parts: civil works and mechanical and electrical.

The amount of debris to be removed by Titan Maritime LLC was not immediately known.