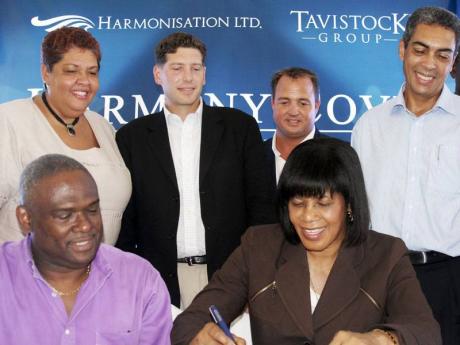 The Jamaican Government now says that the much-hyped, but long-stalled mega-resort project at Harmony Cove in Trelawny will begin next year and take a decade to complete.

The first phase of the project, to cost US$800 million, will take three years to complete, according to a filing with America's Securities and Exchange Commission (SEC) by Finance, Planning and Public Service Minister Dr Peter Phillips.

Jamaica's government produces annual reports to the SEC outlining developments in the island's political economy in order to inspire investor confidence for its international funding activities.

The Harmony Cove resort, with hotels, a casino, private villas, entertainment facilities, a marina and golf course, was unveiled by the Government early in the decade, but has faced hiccups since then.

It appeared to have been reinvigorated in 2006 when Joe Lewis' Tavistock Group signed a joint-venture agreement for the development of the US$2.5-billion resort. Actual construction was to have started in 2009.

However, financing for the project became extremely difficult to find with the global financial melt-down of 2008, of which Lewis himself was a victim. Lewis, a British-born billionaire, is estimated to have 'lost' US$800 million with the collapse of the investment bank, Bear Sterns.

Since then, there has been much shopping around for capital for the project, including among China's ExIm Bank and potential Chinese investors.

However, there has been no sign of Chinese financing for the project or announcement that funding has been found from any other source.

But in the SEC filing, Phillips said: "Construction on the first phase of the project is scheduled to begin in 2013 with a budget of over US$800 million and take approximately three years to complete.

Under the original plan, the development was to be sited on 2,300 acres of mostly beachfront property and was expected to see construction of 4,500 hotel rooms and 500 residential units. The first phase was to have included 2,000 hotel rooms.

It was not immediately clear, however, if these plans remain.

However, the development has been given impetus with Jamaica's recent passage of legislation that will make large, hotel-based casinos legal.

Dr Lorna Simmonds, executive director of Harmonisation Limited, the government agency overseeing the development of Harmony Cove, said that the funding process was in train.

"We are getting the funding in place," she told Financial Gleaner on Thursday.

Dr Simmonds also said the Chinese government, via its EXIM Bank, remained interested in the project.

"We can't really make any pronouncement on their part," she said. "They have not closed the door because the project is very promising in lots of ways," she added, noting that Tavistock remained unwavering in its commitment to the project.

Asked about the timeline, Dr Simmonds said that "certainly by 2013" the project would commence, but there was still a bit of paperwork and loan approval to be done.

Last year, representatives of the ExIM Bank of China toured the project site with then Prime Minister Bruce Golding, and began mulling the prospect of investing in the project.

The ExIm Bank promotes economic and trade relations between China and the world.

Chinese state-run companies have ploughed more than US$1 billion in a number of local projects, including leasing sugar factories, as well as investing in the Montego Bay Convention Centre, the Trelawny multi-purpose stadium and highway projects.