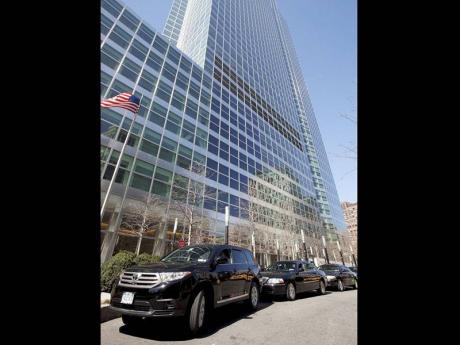 Goldman Sachs, arguably the most storied investment bank on Wall Street, has been compared to a money-sucking vampire squid and called the evil empire of finance. On Wednesday, it got a black eye from one of its own.

Greg Smith, an executive director at the bank, resigned with a blistering public essay that accused the bank of losing its "moral fibre," putting profits ahead of customers' interests and dismissing customers as "muppets."

"It makes me ill how callously people talk about ripping their clients off," he wrote.

The decay of Goldman's proud culture of teamwork, integrity and humility, he wrote, threatened the survival of an investment house that weathered two world wars and the Great Depression.

The stinging essay, 'Why I Am Leaving Goldman Sachs', appeared on the Op-Ed page of The New York Times on Wednesday morning. It was the talk of Wall Street immediately and circulated online all day.

CNBC ran clips of the ornery balcony critics from 'The Muppet Show'. Other websites quickly posted spoofs, including 'Why I am Leaving the Empire', by Star Wars villain Darth Vader. Smith became a trending topic on Twitter.

The Times said the essay had received three million page views online by 4 p.m. Wednesday. The second-most-viewed story had 500,000, and that was a business section story about the essay.

Goldman CEO Lloyd Blankfein and President Gary Cohn told the bank's employees in an open letter that Smith's claims did not reflect the culture of the bank. They cited glowing internal reviews of the service Goldman provides to clients.

"It is unfortunate that all of you who worked so hard through a difficult environment over the last few years now have to respond to this," they wrote.

Smith worked for Goldman in London when he resigned, but the bank did not provide further details or say how much money Smith made. He previously worked in the New York office.

Smith, identified by The Times as head of the company's United States equity derivatives business in Europe, the Middle East and Africa, wrote that he attended sales meetings in which helping clients was not part of the discussion.

"If you were an alien from Mars and sat in on one of these meetings, you would believe that a client's success or progress was not part of the thought process at all," he wrote.

Smith wrote that Goldman had devolved from a company he was proud to work for when he started 12 years ago. Goldman became a public company in 1999, adding pressure for the bank to turn bigger profits.

On Wall Street, the essay may have been shocking in tone, but it was not surprising in content. Goldman's peers, even some of its customers, take its pursuit of profit as ordinary business.

"I would be very surprised if it did anything more than anger the people who are already hostile to Goldman," said Lawrence Baxter, a former executive at Wachovia who teaches at Duke University's law school.

Perhaps most surprising was that the essay was written by an insider in an industry known for protecting its own - and at a bank that has been known in the past to look down on its peers.

"In my experience, it's unusual that somebody would talk ill of their firm," said Maryann Bruce, the former president of Wachovia's Evergreen Investment Services. "You don't usually air your firm's dirty laundry."

Bruce left Wachovia in 2007, the same year the bank settled federal allegations that it had mishandled an Evergreen mutual fund by allowing questionable trading.

Regulators also found that Bruce had banned such trading in 2000, but that another executive went behind her back to continue the practice.

Smith couldn't be reached for comment. On the Web, he was both praised as a truth-teller and derided as disgruntled, and some people noted that he had waited until after Goldman's bonus season to quit.

"I'm not surprised there is this kind of effort to dismiss him," said Baxter. "The system always marginalises people who dare to criticise its fundamental working."

By quitting, Smith almost certainly gave up stock options that had not vested.

In his essay, Smith said he came from South Africa to attend Stanford, was a Rhodes Scholar national finalist and won a bronze medal in table tennis in the Maccabiah Games in Israel, sometimes known as the Jewish Olympics.

He also said he was one of 10 employees at a bank of more than 30,000 selected to appear in a recruiting video.

In the essay, Smith said there are easy paths to becoming a leader at Goldman, including persuading clients to invest in products that the company wants to get rid of or that will bring the most profit to Goldman.

Another way, he said, is to "find yourself sitting in a seat where your job is to trade any illiquid, opaque product with a three-letter acronym."

John Allison, the former CEO of BB&T Corp, now the 11th-largest financial company in the US, said he suspected that pockets of Wall Street sacrificed their clients to save themselves when the system started unravelling in 2008.

But generally, he said, "We never ever want to do anything that was bad for our clients. Even if you create a profit in the short term, it will come back to haunt you in the long term."

Goldman's success has made it one of the most powerful engines of Wall Street. Goldman and Morgan Stanley were the only major investment banks to survive the financial crisis intact in 2008. The crisis crushed Bear Stearns and Lehman Brothers and almost killed Merrill Lynch.

But Wall Street's success and excess have also made it a lightning rod for lawsuits, regulatory probes and public wrath — and no doubt contributed to the white-hot popularity of Smith's essay online.

Cracks are also showing in Goldman as it navigates a weak economy and tighter government controls. In the third quarter of last year, it lost money for just the second time since going public. Revenue has fallen for each of the past seven quarters.

The influence of the bank, sometimes called the New York Yankees of finance, isn't limited to the private sector. Goldman is known for churning out leaders who run the world, earning its alumni praise for public service but also raising questions about whether bankers should oversee the industries that made them rich.

Henry Paulson, who was treasury secretary when the government devised its US$700-billion bailout of the banks in 2008, is a former CEO. So is Jon Corzine, the former New Jersey governor who was at the helm of the brokerage MF Global when it collapsed.

Matt Taibbi of Rolling Stone, a vocal critic of Goldman who wrote the "vampire squid" line, said in a blog post that Smith's editorial might do what financial regulation and the Occupy Wall Street protest movement could not.

"Real change was always going to have to come from within Wall Street itself," he wrote, and the best way is for investors to see that "the Goldmans of the world aren't just arrogant sleazebags, they're also not terribly good at managing your money."