Give Messi his due 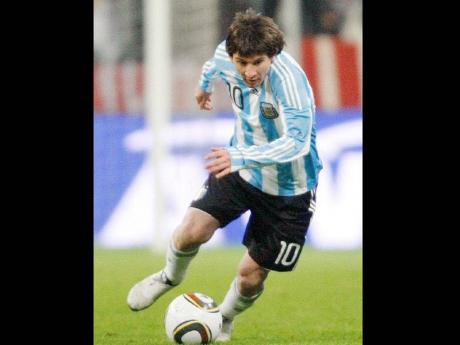 Ever since his virtuoso five-goal performance for Barcelona against Bayer Leverkusen, the debate has been taken to another level. How good, really, is Lionel Messi?

That he is the best contemporary player seems fairly obvious, but where does he rank on the all-time list of football greats? I believe he is right up there among the top three.

Those who hesitate to give Messi his full accolades usually claim he is nothing more than a glorified club footballer. At the club level, it is accepted that he has few, if any, peers, but the argument persists about his World Cup flops, or for Argentina generally. It's not true. Let me set the record.

Messi has played in two World Cup tournaments, the first in 2006 when he was still in his teens. Going into the 2006 tournament, Messi was injured for two months and wasn't playing football at all. Indeed, some were surprised he was even included. He was on the bench when Argentina played their first game against Cte d'Ivoire.

In Argentina's next game against Serbia-Montenegro, Messi came on as a 74th-minute substitute. Within minutes he gave Hernan Crespo a goal, and scored Argentina's last goal in a 6-0 win. So those who say he hasn't scored at the World Cup are wrong. Indeed, he was the youngest goalscorer at the 2006 tournament.

He started in Argentina's next game against the Netherlands, and did well, but was surprisingly brought on, only as an 84th-minute sub in their next game against Mexico. For what it's worth, he did score what appeared to be a legitimate goal, which was ruled offside. He did not play at all in Argentina's quarter-final against Germany, which the Germans won. Leaving Messi on the bench for that game must rank as one of the most controversial, if not foolish, coaching decisions in World Cup history. To this day José Pekerman has not lived that down.

So the teenage Messi played only one full game in 2006, and had precious little playing time overall. Saying he flopped is patently unfair.

In the 2010 tournament, he was easily the best player, although he didn't score. In Argentina's first game of that tournament, they came up 1-0 winners against Nigeria, Messi had numerous shots saved by Vincent Enyeama.

Argentina won their next game, beating Korea 4-1. Messi had a hand, or more precisely a boot, in all four goals, including the hat-trick by Gonzalo Higuain. Higuain did get the Man of the Match award, but it could easily have been Messi. In Argentina's next game against Greece, Messi was mesmerising and was duly named Man of the Match.

In Argentina's game against Mexico in the round of 16, Messi assisted with two of Argentina's three goals, including one to Carlos Tevez. In Argentina's quarter-final, against Germany, Messi was below par, as were all his teammates as they crashed out 4-0. Looking back at the 10 goals that Argentina scored in the 2010 World Cup, Messi assisted in no fewer than six or seven of them. He didn't score, but there was nobody in the tournament who was so effective at dictating the game and creating chances for others.

At last year's Copa America, Messi also didn't score, but what is not widely known is that he assisted in three of the four goals that Argentina scored in open play. His performance was so breathtaking that he was chosen as Man of the Match twice in the tournament, when Argentina drew 1-1 with Bolivia and when his team won 3-0 against Costa Rica.

Not just a club player

Those who say he is a mere club baller are badly mistaken, or are merely looking at the goalscoring column, which is a huge mistake. His three-time, back-to-back Ballon d'Or award isn't merely about what he has done for Barcelona. Messi must be judged as a creative and attacking midfielder, and not as a pure striker.

The other two best creative midfielders in the modern game are without doubt, Diego Maradona and Zinedine Zidane. In his 67 games for Argentina, Messi has scored 22 goals, virtually a goal every third game he plays. His goal-against-game ratio compares quite favourably with Maradona's 34 goals in 91 games and is much better than Zidane's 31 goals in 108 games.

So if he is a flop for his country because of his goalscoring exploits, those other two world-class players would be in the same category!

So let the argument be put to rest now. Messi is easily the best player on the planet now, and unquestionably among the best ever. Maradona? Yes. Pele? Maybe. But there can't be too many others who can be put above him.

Orville Higgins is the 2011 winner of the Hugh Crosskill/Raymond Sharp Award for Sports Reporting. Email feedback to columns@gleanerjm.com.