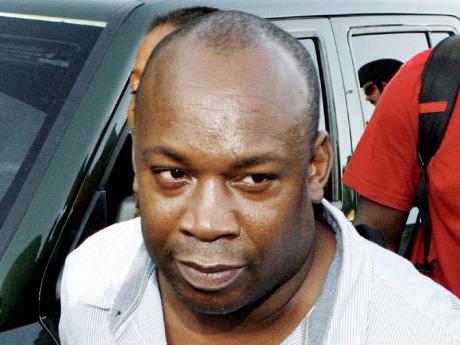 Christopher 'Dudus' Coke, once the most feared underworld enforcer in Jamaica, is to appear in a United States (US) court today faced with the prospect of spending more than 20 years in prison.

Since pleading guilty to conspiracy and racketeering charges in August 2011, Coke has had to wait almost seven months to hear his fate.

Initially, he was scheduled to be sentenced on December 8, 2011 but the court agreed that more time was needed and the sentencing date was shifted to January 17 this year.

Days before that sentencing, Coke's lawyers requested a further delay to February 28 and later sought time to respond to a hard-hitting submission by the prosecutors, causing a third postponement of the sentencing.

But with all the motions filed and the arguments made, today is D-Day for the man whose word was once law in his west Kingston enclave and as far away as New York.

Coke looked a broken, if not comical figure, when he was captured by local police in June 2010.

While the man slated to appear in the United States Southern District Court of New York today will not be wearing the woman's wig he was arrested in, he will be more that broken figure than the enforcer whose name was enough to make grown men quake.

Over the almost 21 months that he has been in custody in the US, Coke and his lawyers have pleaded with judge Robert P. Patterson to show mercy in his sentencing.

"Good day to you, sir. I am humbly asking if you could be lenient on me," Coke said in a seven-page handwritten letter to Patterson, shortly after he entered the guilty plea.

"I implemented a lot of social programmes for the residents of my community - programmes that teach them about self-empowerment," Coke wrote as he pointed to the good deeds he had reportedly done in west Kingston, and Tivoli Gardens in particular.

Without responding directly to the claims that he was a "murderous scoundrel" who controlled a brutal multibillion-dollar drug and gun empire, Coke's letter pointed to the impact that his arrest had on his then two-year-old son and his mother who has since died.

Lawyers representing Coke have also asked the judge for leniency for their client, urging the court to allow his sentences to run concurrently which would see him serving less than 20 years.

However, prosecutors have been aggressive in their push to have the former west Kingston strongman sent away for as long as possible, 276 months (23 years).

"The nature and circumstances of the offence are extremely serious and counsel is in favour of a sentence of 276 months' imprisonment - the statutory maximum," said prosecutors in a submission to the judge.

"Coke ran and controlled an international criminal organisation, and the local Kingston community of Tivoli Gardens, through a combination of violence, intimidation and financial power.

"Coke's control was buttressed by the narcotics proceeds and firearms that Coke obtained from his US-based criminal associates. Those US-based associates, in turn, supported Coke because a close relationship with Coke increased their status in their communities … (and) also because some of their family members remained in Tivoli Gardens or the surrounding communities and were vulnerable to retaliation by Coke and members of his organisation," charged the prosecutors.

According to the prosecutors, Coke should be sent to prison for a period that would not allow him to return to Jamaica and re-establish his brutal criminal network.

"Coke exploited some of the more vulnerable members of his community to commit these crimes," said the prosecutors as they pointed to letters allegedly written by women in Jamaica.

The prosecutors pointed to one letter dated January 16, 2012 in which the unnamed writer argues that Coke should be "put away forever" and another dated September 2, 2011 which argued that Coke should "spend the rest of his life in a maximum security facility".

But the judge has also received letters in support of Coke. These include a petition signed by several residents of west Kingston.

The letters assert that Coke has been "generous" and "extremely kind to children and senior citizens", and that he "fed and partially maintained" a home for the elderly in Kingston.

Coke was extradited to the US after he was arrested near the St Catherine-St Andrew border.

That came almost one month after a bloody incursion in west Kingston by the security forces ended with more than 70 people dead but without his arrest.