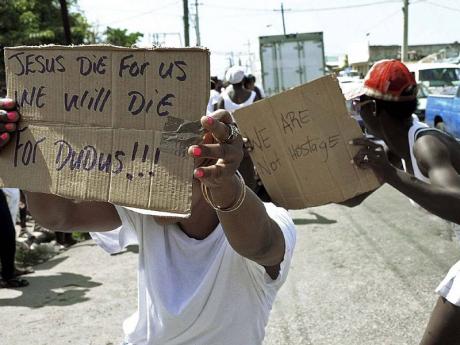 In this photo taken Thursday, May 20, 2010, demonstrators display pieces of cardboard with messages in support of Christopher 'Dudus' Coke during a march in Kingston. - FILE 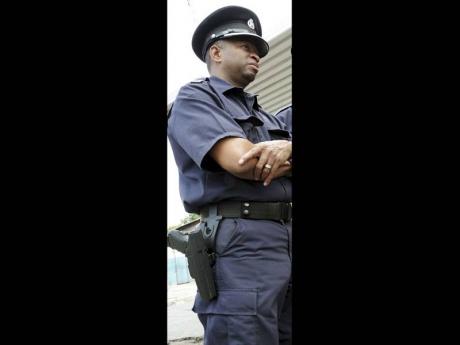 The police in west Kingston have revealed that a number of security measures have been put in place in "specific areas" to thwart any possible threats arising from today's sentencing of admitted drug kingpin Christopher 'Dudus' Coke in a United States court.

Senior Superintendent Terrence Bent, who heads the Kingston Western Police Division, said the intelligence available to law-enforcement personnel suggests that there are no security threats arising from Coke's sentencing, but made it clear the police were taking no chances.

"So whilst we do not see a perceived threat, we are proactive in that we will police all the events around Mr Coke in a manner to prevent any security threat and threats to the public on a whole," Bent told The Gleaner yesterday.

He said the police have conducted their assessments and have identified several individuals and groups, analysed their operational levels and the threat they pose to residents and the security forces.

"We feel that once we first indicate to them that we are aware of the sentencing and the likelihood of protest and otherwise and put the necessary policing measures in place, I think we will be able to control it," he said.

Added Bent: "The thing is that we know who they are, where they operate and we have enough support from within the division, the area and the High Command to deter any activities that would prevent citizens from moving about freely."

He said the security measures also include a series of curfews in "specific areas".

"What we have done is basically taken control of the community and the patrols are so sensitised as to the possibilities around anything with Mr Coke," he said.

The 42-year-old Coke is facing a 23-year prison sentence after he pleaded guilty last September to racketeering conspiracy and conspiracy to commit assault in aid of racketeering.

He is believed to have directed his operations from the west Kingston community of Tivoli Gardens, sections of which remain loyal to him.

Bent, however, sounded a warning to residents who may be planning any form of disruptive activities.

"We will be operating in a manner to prevent any threat to the lives of citizens. If persons wish to take on a posture that is threatening to the citizens and the security forces, we will have to deal with it in a professional manner," he said.