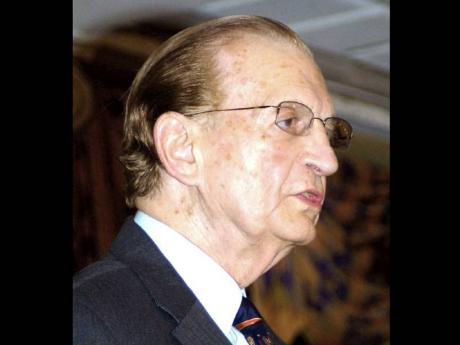 Former Prime Minister Edward Seaga is calling for greater efforts to be placed on early-childhood education, saying it would contribute to an improved nation.

Alluding to figures that reveal that only a third of children entering primary school can handle the curriculum, Seaga said yesterday that educational reforms must begin where education begins - reading, writing and arithmetic.

Seaga, who was delivering the University of Technology's (UTech) 25th anniversary lecture at The Jamaica Pegasus hotel in New Kingston recently, said the strategies must be created to improve the standard to at least having 90 per cent of all primary school entrants reaching the same level of literacy and numeracy by grade two.

"Young children entering infant and primary schools must progress at the same rate if they are to learn together. It is no use creating measures that can, at best, improve this situation in bits and pieces, leaving the majority of those who are blighted to carry water in baskets," he argued.

"No teacher can be asked to succeed if two-thirds of the little minds in the classroom are blank slates. It is sinful!" he added.

Commenting on the cost to fix the early-childhood education system, he said he was advised that it would cost $7 billion, but countered that it in fact costs more money to fail.

"I would have preferred to see the educational system restructured to give every child the opportunity for a successful start than to have had more than $8 billion spent on Cricket World Cup, or unnecessarily renovating the Palisadoes Road," Seaga said.

He compared education with electricity, saying both were important to keep the country going but persons seem to be more accommodating to illiteracy than they are to electrical blackouts.

"Any country without electricity is doomed because virtually all useful devices work with electrical power; any country without full literacy and numeracy is doomed because virtually everyone works with knowledge. We are intolerant of electrical blackouts, but we are tolerant when minds are shut down in the mental blackouts of illiteracy," he said.

Seaga had last year called for the State to take full responsibility of early-childhood education, saying that both the teaching and results from infant schools are far better than that in the basic schools.

Since Education Minister Ronald Thwaites took up office in January, his thrust has been to improve the early-childhood level so that he could see better results at the primary and secondary levels.