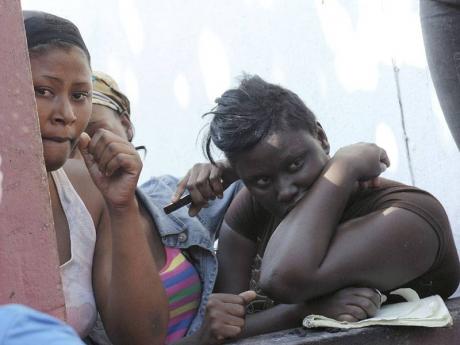 Grief on the face of residents in Allman Town, central Kingston, over the death of 90-year-old Lealith Cain, who perished in a fire at her home early yesterday morning. The body was removed to a funeral home. - Norman Grindley/Chief Photographer

Tears are still flowing from residents of Allman Town as they try to accept that 'Ms Girly' is gone.

Lealith Cain, known to everyone as 'Ms Girly' or 'Girly Cain', was the sole fatality in the fire that destroyed a dwelling on John's Street in the community early yesterday morning. She was 90 years old. Though she had no biological children, Ms Girly, a retired postmistress, was very much a mother to the community. There were sombre faces on the old and young as residents remembered her kindness.

"She never turn back anyone," said Barbara Leslie, 41, who said she has known Ms Girly since she (Leslie) was a child.

"Whenever Ms Girly cook, everybody get, even stranger. If is even two spoon a rice, she's giving you something," she recalled. The residents showed The Gleaner a spot in the yard where they say the young women in the community would come to get their hair done. Ms Girly was not to be left out.

"She used to wear her false hair to, you know, gwaan like she a young girl, and sing say she 'Nuh want no bruk pocket man'," Leslie laughed sadly, her dark glasses failing to hide her reddened eyes.

Other residents recalled that Ms Girly was fearless, standing up to any potential 'bad men' who had eyes on the area. They told us she loved babies and young people and had particular encouragement for the young women to get an education and be independent. Like a house mother, she was known to stand at her gate admonishing the young people to get off the streets as night approached. They say Ms Girly hailed from Trench Pen but her family moved to Allman Town decades ago. They reeled off the names of her relatives, all stalwarts of the community, who had passed on before. Even staff who worked in the pensions section of the Ministry of Labour and Social Security, who knew Ms Girly well, came by to pay their respects.

"She is the last one from that generation," said Leslie. One person who was inconsolable was Dawn Henderson who lived with Ms Girly for a time.

"Mi wake up and smell smoke and we run to Mama room," Tercine said, in explaining how she and her boyfriend tried to save her grandaunt.

"When we kick off the door, a jus' fire! She burn up a'ready," she added, noting that thick smoke also hindered their efforts.

Residents theorise that it was either a lamp or the mosquito destroyer that started the blaze in her room, thus giving her no time to get out.