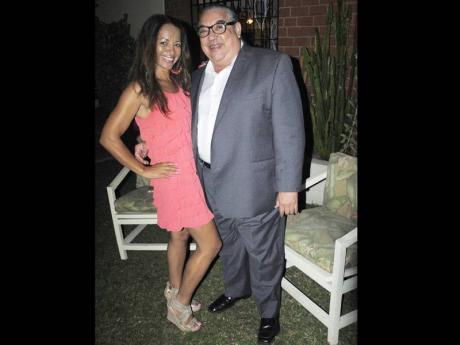 Robert MacMillan and the fabulous Anne Harris at the IPP Wine and Cheese soiree. - Contributed

So my darlings, with the royal visit out of the way, the buzz is now all about Easter and the place to be and be seen, and luvs, believe me when I say there's no place like Jamaica for the holidays. Luvs, y'all can forget those who are 'flying to Miami' for the Easter. Flying to Miami for anything except retail therapy is seriously passé, and even that still has no cachet, especially now that the country, never mind the rest of the world, is still in the throes of an economic crunch.

Anyway my dears, it's all about Easter and for many its picturesque Port Antonio. For the fun-loving-thrill seekers, however, there's no place like Hedonism II in Negril, and honeys, as it's where the Easter Beach Bunnies will be partying and pumpkins, that is definitely the preferred party destination in fabulous, wanton Negril.

Luvs, forget the airheads and wannabes who consider and embrace the notion that all things foreign are all that. Conversely, especially if it's on our shores and sport an accent, it is not indicative of style and class. Nonsense, my daahlings, and eschew those who subscribe to this doctrine. Destination Jamaica is as hot as ever. Hedonism II even more so and sizzling like a cauldron of bubbling magma. And believe you moi, there's nothing like a Jamaican mini holiday to make one fully appreciate the beauty, bounties and absolute fabulousness of this island.

And with the GM of the racy resort, Kevin Levee, promising a weekend getaway like no other, promoted under the theme: 'Yielding To Temptation', boasting a package of tantalisingly entertaining treats morning, noon and night, y'all know we are talking party central here. The top picks of hot DJs from across the national media houses, such as ZJ Rodrick Howell, ZJ Elektra and the legendary Peter Phillips Disco, headlining the musical entertainment, pumpkins, we are talking game on and nothing but.

Now throw in a bevy of bikini-clad beach bunnies as entertainment hostesses for the beach and pool parties; the ever-sizzling piano bar and nightclub, add some buffed playboys and some hot centrefolds, including the Miami's Bad Girls Club's Erica Lynne and Playboy's and Jamaica's own Chocolate Goodness, Bunny Nahtasha Budi, and you know we are cooking with 10 coal stoves!

And dears, speaking of cooking, if all that partying proves too much, luvs, international celebrity chef Michael C. Giletto will be in the house conducting special cooking demonstrations for guests, so pumpkins, you know we are talking all that and then some come Easter. But the best party of it all is the resort is not only the party capital of the Caribbean, but everything you have heard about the resort is true, and then some.

And speaking of exciting people and places. If you missed the International Proxy Parents (IPP) Wine and Cheese soiree last Friday evening, then the buzz is y'all missed one fab outing, as not only were guests treated to some fine cheeses and excellent wines, but also a fab musical fare by DiMario McDowell & Friends. It was held in the upscale neighbourhood of Plymouth Avenue, St Andrew.

Luvs, buzz is the $2,500 per person do was another social smasheroni with the fab the chic and the style denizens out in supportive numbers.

And as the landmark hotel, Jamaica Pegasus in New Kingston, continues its metamorphosis, there's a new banqueting manager to assist with the change, and luvs, they could not have appointed a more fab manager as the woman at the helm is the fabulous Shana Newman Brown.

And so congrats are in order and extended.

And come next Thursday the 22nd, Shammel Johnson; Peter Sibblies; and the fab Andrea Hutchinson, now in Salem, New York, will make it a very special day of partying.